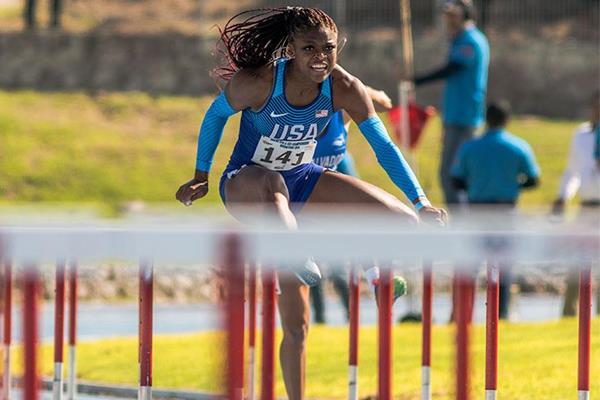 USA’s Tonea Marshall and Samson Colebrooke of The Bahamas led a superb weekend of sprinting in Queretaro at the 10th North America, Central America and the Caribbean (NACAC) U23 Championships, which concluded on Sunday (7).

Sprinters and jumpers took advantage of the 1800m altitude at the Parque Queretaro 2000 stadium – which also hosted the inaugural edition in the U18 division – to establish eight championship records at an event that attracted close to 500 athletes from 28 countries.

Tonea Marshall produced one of the highlights of the championships. Pushed by her compatriot Chanel Brissett in the 100m hurdles, Marshall ran to a personal best of 12.57, the fourth fastest in the world this year and a huge improvement on the championship record of 12.78 set three years ago in El Salvador. Brissett hit the last hurdle but still managed to better the previous mark with 12.73.

“I am very proud to represent team USA,” said 20-year old Marshall, who erased her previous personal best of 12.66. “It’s been an amazing season and I look forward to the Nationals later this month.”

Colebooke, a senior law and society student at Purdue University in Indiana, came away from Queretaro with three medals.

He won the 200m in 20.58 (0.8m/s) after clocking a wind-assisted 20.41 in the heats. Earlier in the championships, he took silver in the fastest and closest 100m race in the 17-year history of the event, with three men crossing the finish line in 10.01. It was a personal best for him and gold medallist Waseem Williams of Jamaica. Mario Burke of Barbados finished third with the same time.

Colebrooke also ran the second leg for The Bahamas in the 4x100m as his team secured the silver medal behind the USA, 40.03 to 40.33. Initial winners Jamaica were disqualified due to an exchange zone violation in the second baton exchange.

“I will leave with great memories from Mexico in my last meet of the season,” said Colebrooke. “I have worked hard this year and I am happy to represent team 242 (a reference to The Bahamas’ area code).”

Pushed by a strong tail wind, the US sprint duo of Teahna Daniels and Twanisha Terry ran to swift times of 11.03 and 11.08 in the 100m, much faster than the championship record of 11.19, but a 3.3m/s tailwind rendered the performances invalid for record purposes.

NCAA champion Angie Annelus, the third fastest woman in the world in 2019, took the 200m in 22.84 in her first international championship.

WRIGHT LEAPS TO RECORD LONG JUMP VICTORY
Trinidad and Tobago’s Andwuelle Wright led the performances in the field. On the opening day, Wright landed at 8.25m in the third round of the long jump, breaking a championship record that had stood for 13 years and adding two centimetres to his own national record. The Central American and Caribbean Games silver medallist sealed his victory with another 8.25m in the final round.

Building on their success on the US collegiate circuit, USA’s Clayton Fritsch and Zachery Bradford braved the cross winds on Saturday evening to clear a championship record of 5.60m in the pole vault. Fritsch went over that height on his first attempt to secure gold.

The mixed 4x400m relay made its debut and provided a dramatic finale to the championships. Jamaica’s Martin Manley gave Roneisha McGregor a 70-metre lead and she held off the charge from USA’s Marcus Parker on the home stretch to win in 3:16.99. Terry Thomas and Shiann Salmon completed the winning quartet.