It was a great day of racing at the fourth and final Canadian Cross Country Championships in Kingston, Ont., before the event heads west for the 2019 and 2020 editions in Abbotsford, B.C. The conditions were favourable with the rain holding off until midway through the final race of the day, the men’s senior 10-kilometre. 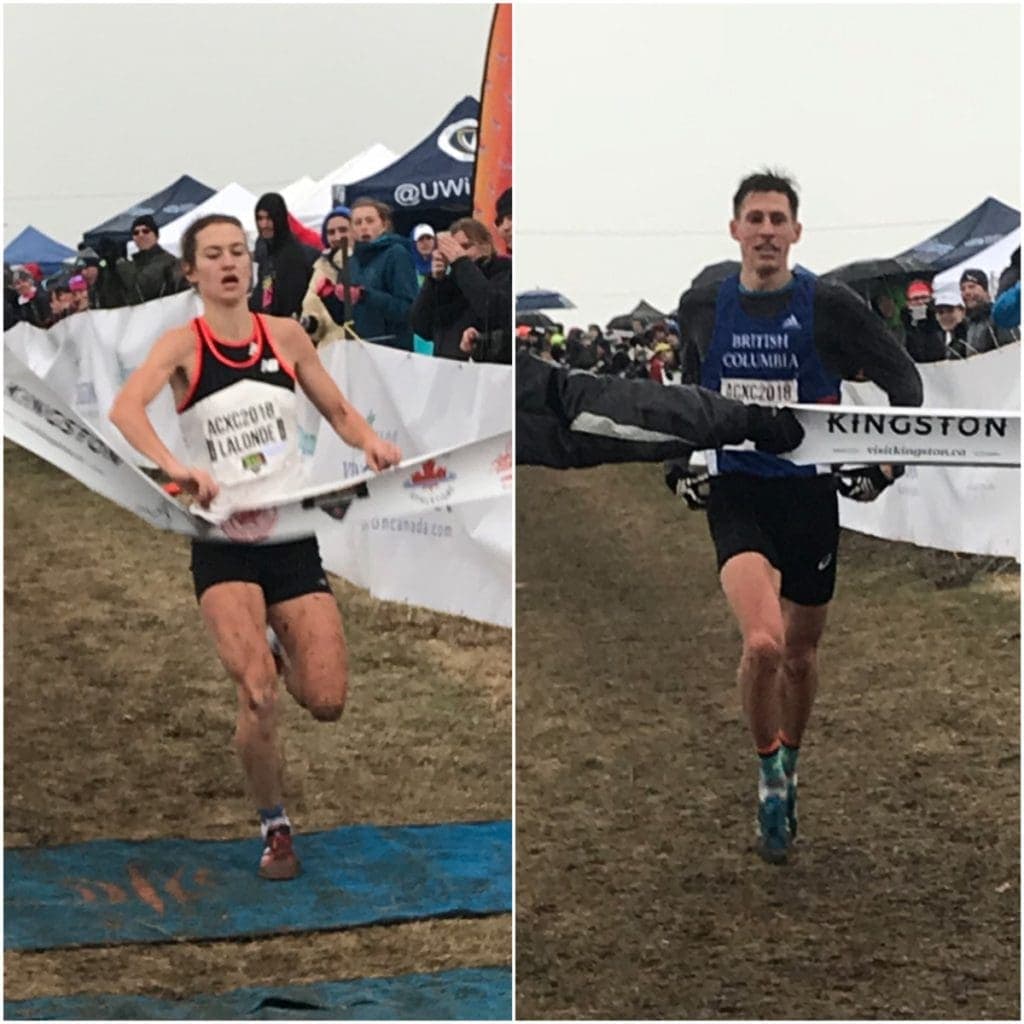 Geneviève Lalonde, who hadn’t raced cross country in five years, took the senior women’s title. “It feels awesome. Throughout the season, I thought about what I wanted to get out of it. The end of my summer season went a little bit rocky, I had a few emotional issues and I hurt my achilles at the end of the season. I came into the season thinking about cross country and ultimately my goal was to qualify for Worlds in Denmark.”

Lucas Bruchet made it back-to-back titles with a domination performance leading the way from start to finish. “It feels pretty good. This one really means a lot to me. I missed a fair amount of time in the summer. I didn’t have a track season so this is redemption for me a little bit. It was hard work all fall and it feels good to defend the title today.” On his race plan and execution, “We trained all fall for a hard 30 minutes. What’s the point of waiting around and dilly dallying and seeing who can run the fastest last kilometre. I felt that if I came out today and ran hard for 30 minutes that it was going to be difficult for anyone to beat me. That just meant going out hard right from the gun.”

Brogan MacDougall, from host club Physi-Kult Kingston, completed an undefeated season winning the women’s U20 race. “I felt really strong. I took it out hard, but the other girls were right there the entire time just pushing me.” MacDougall also won this race last year, “I felt really good out there. Sometimes my coach (Steve Boyd) leaves [the strategy] up to me, when I was younger it didn’t always work out too well. I could have used direction. I think he’s trusting me more and he knows after you do this many races it starts to become second nature.”

Tyler Dozzi of the UBC Track & Field Club on his men’s U20 title. “This one means a lot more to me than the U18 race (that I won two years ago). I had to work a lot harder for this one. I’ve had some ups and downs throughout university – dealing with school and being an athlete, heavy course load and everything – and I just had a great support system coming into this race. Some people have really helped me out – my coach, my teammates, my parents and God for everything that I have been given. It’s a wonderful opportunity to get the freedom and joy that I get from running right now.”

Kendra Lewis of Vancouver Olympic Club took the win in the girls U18 category. “It was pretty good. I knew it was going to be a fight to the finish. I tried to stay behind Sadie (Sigfstead) and put on a really a good kick at the end. I knew she was right in front of me and I could see that she wasn’t speeding up. I was just trying to stick behind her, because I knew I could out kick her at the end of the race.” Lewis adds, “Going up those hills in the wind was tough, because it’s a hill – its already hard – and then the wind is pushing you back. It’s tough but you have to battle through it.”

Ron MacLean of the University of Regina Track Club won the national title in the boys U18 category. “I was feeling a little sick this morning. I actually threw-up in the porta-potty a couple of times before the race, got on the line, felt fine and went out for a run. There was a lot of pushing and shoving out there, which was frustrating. I saw Said Moktar from Saskatoon go up front. Usually we compete against each other and I beat him. I really didn’t like that he was ahead of me, so I went up with him and we kind of ran together for a little while there at the end of the second lap. We really pushed each other. It was good to have him out there.”

“I thought I would also forward this link to show off our National XC Championships in Kingston Ontario which are trials for our teams to NACAC and Worlds”.

We have over 1100 competitors and some of our Olympians competing
ACXC 2018 fun facts:

Saturday will mark the largest Canadian Cross Country Championships in Athletics Canada history with 1,124 entries (excluding the community race)
685 = men
439 = women
252 = entries in the U18 men’s race, the most highly contested race of the Championships
102 = medals that will be handed out
73 = number of athletes on the largest team (University of Toronto Track Club)
9 = number of provinces/territories represented
8 = clubs looking to defend their title
7 = defending champions will lace-up

The course will be tough, cold and wet! Todays Temperatures are -6C but with 30km winds bringing the wind-chill down to -14C !
For race day tomorrow its predicted to warm up significantly to +6 but with rain!