Jamaica’s Fedrick Dacres and USA’s Shamier Little produced superlative performances on Sunday (12), the final day of the third NACAC Championships, a competition that saw 27 records set or broken during the three-day event at Varsity Stadium in Toronto. 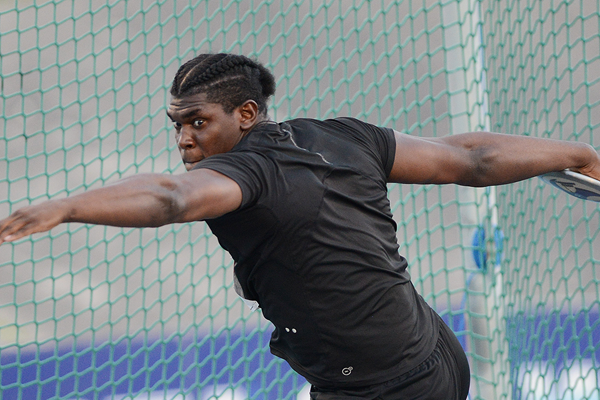 Her winning mark of 53.32 is the second-fastest time in the world this year, her second fastest ever and more than a second quicker than the previous championship record. Russell finished second in 53.81 followed by USA’s Georganne Moline in third with 54.26.

Little’s triumph was one of 11 victories by US athletes on the final day of competition in Toronto, bringing their gold medal tally to a table-topping 25.

Jamaica also enjoyed a successful Sunday with a trio of gold medals, led by Fedrick Dacres in the discus.

Dacres, who also won the Pan-American title in this city, improved the championship record by more than five metres with his opening throw of 65.89m. He improved to 67.39m in the second round and ended with 68.47m, his fifth best effort ever.

Compatriot Traves Smikle made it a 1-2 for Jamaica with 65.46m in a competition where the top four men bettered the previous championship record.

MCMASTER MAKES HISTORY
Aside from Dacres and Little, championship records were broken by seven other athletes on Sunday, including Kyron McMaster in the 400m hurdles.

Just two weeks after his victory at the Central American and Caribbean Games, McMaster recorded a championship record of 48.18 to give the British Virgin Islands its first ever NACAC title. And, as was the case at the CAC Games, the 21-year-old finished ahead of early leader Annsert Whyte of Jamaica, who clocked 48.91.

“I do not think I executed as I wanted so I ran for the championship win,” said McMaster. “It came down to who had a better technique over the hurdles. Once I saw him at the ninth hurdle, I attacked again at the tenth hurdle. The British Virgin Islands do not have a lot of top-class athletes so it feels good to something for the country.”

USA’s Marquis Dendy, the 2016 world indoor champion, opened with a championship record of 8.29m in the first round of the long jump. Jamaica’s Tajay Gayle challenged him with 8.15m in the third round and improved to a personal best of 8.24m in the last to claim silver.

As he did a week ago at the CAC Games in Colombia, his fellow Jamaican Ramone Bailey beat Bermuda’s Tyrone Smith with his last jump (8.09m) to secure the bronze.

In a rematch between Jamaican and the USA in the horizontal jumps, the former took the upper hands in a contested women’s triple jump, the last field event of the championships.

Defending champion Shanieka Ricketts led in the first three rounds with 14.04m. US record-holder Tori Franklin moved to the lead with 14.09m on her fifth attempt, but Ricketts responded with 14.21m. The Jamaican closed the competition with 14.25m, two centimetres better her winning jump and championship record set in San Jose, Costa Rica, in 2015.

In the sprints, Kyle Greaux prevented an expected 200m victory for Canada’s Commonwealth silver medallist Aaron Brown in his home town. A week after joining the sub-20-second club at the CAC Games, Greaux edged Brown in the closing meters to win Trinidad and Tobago’s only gold of the competition with a championship record of 20.11. Brown finished second in 20.20.

The women’s victory went to Jamaica’s Shericka Jackson (22.64), in a close battle with hometown favourite Crystal Emmanuel, who was rewarded with a season’s best of 22.67. USA’s world 400m champion Phyllis Francis finished third in 22.91.

The USA finished strong with victories in three of four relays. In the closest race, world indoor 400m champion Courtney Okolo reduced a 15-metre deficit and overtook Jamaica’s Christine Day to bring gold for her quartet, a day after missing out on the medals in the individual one-lap race.

Local fans were pleased as Canada’s Bismark Boateng, Jerome Blake, Mobolade Ajomale and Aaron Brown ran 38.56 for gold in the men’s 4x100m, ahead of Barbados and Trinidad and Tobago. The US squad had problems in the first exchange and did not finish.