Mexico’s Juan Luis Barrios became the first man athlete to win eight gold medals in athletics at the Central American and Caribbean Games as three records fell on the opening day of track and field action at Rafael Cotes stadium in Barranquilla, Colombia, on Sunday (29). 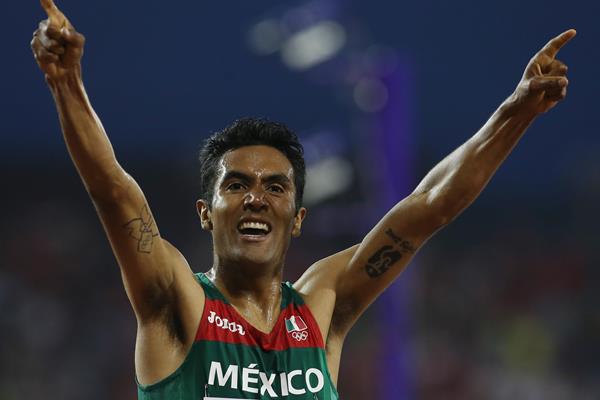 The defending 10,000m champion was content to sit and follow a pedestrian pace early in the race, as eight of the nine contenders covered the first half in 15:23.

With less than a mile to go, Guatemala’s Mario Pacay moved to the front and took Barrios with him as the duo separated themselves from the chasers. Pacay led at the bell, but Barrios found an extra gear with 250 metres to go and went on to win in 30:07.49, his eighth individual gold medal, to become the first male athlete to achieve such a feat.

“This marks the end of my track career,” said Barrios, a two-time Olympic 5000m finalist. “I never knew that I would achieve so much when I first competed in El Salvador (2002) as a teenager. I am grateful to the Colombian people. I love their joy of live and the passion they show in their everyday life.”

Only two other athletes have won eight gold medals in the history of the Games: Cuba’s Ana Fidelia Quirot and Cuban-Mexican Liliana Allen, but none has won more than five individual titles.

A three-time gold medallist in previous editions, Puerto Rico’s Beverly Ramos was aiming to break Mexico’s dominance in the women’s 10,000m. Ramos led from the start and a 3:12 split in the third kilometre allowed her to gain a comfortable 40-metre lead over her closest chaser, Mexico’s Patricia Sanchez.

At the half-way mark, covered in 16:28, Ramos was on course to break Mexico’s Adriana Fernandez’s 20-year old Games record by more than a minute. She continued to enjoy a comfortable lead until the final lap. The faster pace and the solo running in hot and humid conditions took their toll on Ramos, who slowed down to a jog in the final 250 metres. Sanchez was inspired when she saw the lead had shrunk and overtook Ramos on the homestretch to clinch gold in 33:41.48, the first Games record in Barranquilla. Ramos fell to the track after crossing the line in 33:46.99.

Cuba’s 2012 Olympic silver medallist and 2015 world pole vault champion Yarisley Silva became the first athlete to successfully defend her title as she cleared 4.70m on her first attempt, 10 centimetres higher than her previous record set in Xalapa 2014. Silva opened with 4.40m and then cleared 4.60m. She called it a day after setting the second record of the championships.

Fourteen men and nine women who have competed at 100m at previous editions of the CAC Games have won either Olympic or World Championships medals. The first round and semifinals of the women’s and men’s 100m lived up to the rich history of the region as the crowd was treated to fine sprinting on Sunday.

Antigua and Barbuda’s Cejhae Greene was the fastest in the men’s heats with a wind-aided 10.02 (2.4m/s). He came back two hours later and set a personal best and Games record of 10.00 in the second semifinal, faster than the 10.06 set by Churandy Martina in 2006.

Jamaica’s 2012 Olympic 4x100m gold medallist Nesta Carter showed solid form with a comfortable and wind-assisted 9.92 (2.1m/s) to win his heat. All finalists ran 10.10 or faster to enter Monday’s race for the medals.

Colombia enjoyed its first gold in a hotly contested discus competition between two friends: Mauricio Ortega and Cuba’s defending champion Jorge Fernandez. A two-time World Championships finalist, Fernandez opened with 65.27m, his farthest throw in two years. The last to throw, Ortega ensued with a massive 66.30m, a Colombian record and only two centimetres shy of the South American record. Ortega backed it up with a 65.73m release in the fourth round, the fourth farthest throw of his career.

“I was competing with a friend and he pushed me to exceed my expectations,” said Ortega. “You can expect great things from Colombia at the Games.”

Venezuela’s Rosa Rodriguez claimed the first athletics gold with a 67.91m effort in the women’s hammer, an improvement from silver in 2010 and fourth in 2014.

Cuba’s Briander Rivero leads the decathlon after five events with 4179, 150 more than his compatriot, two-time world and Olympic medallist Leonel Suarez in his first decathlon in almost a year. 90 points separate third from fifth.

The second day of the tournament features eight finals, including 100m and 800m for both men and women. The local crowd’s attention will be focused on their local heroine, Olympic triple jump champion Catherine Ibarguen, who will contest the long jump final two days before her specialty event.