Shelby Houlihan completed an unprecedented double-double on the final day of the US Championships in Des Moines on Sunday (24). 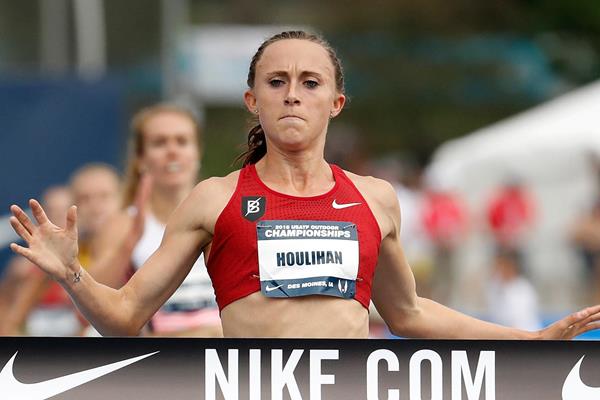 She won the 5000m in 15:31.03 to accompany her 1500m title from Saturday. Other athletes had previously achieved this double at the US Championships outdoors, but Houlihan is the first athlete to accomplish the feat following a similar double (1500m and 3000m) at the US Indoor Championships in the same year.

As the four-day championships closed, other highlights included Evan Jager’s seventh consecutive win in the 3000m steeplechase, Devon Allen’s upset of Grant Holloway in the 110m hurdles, 800m victories by Clayton Murphy and Ajee Wilson, and one of the top US discus competitions.

“I could kind of feel it squeeze down the last mile,” said Houlihan, whose final mile was run in about 4:44. “I just tried to hammer as much as I could.”

She planned to run only the 5000m here until she won the 1500m at the IAAF Diamond League meeting in Eugene. The 25-year-old conceded she is more confident in the 1500m than in the 5000m.

At the IAAF World Indoor Championships Birmingham 2018, she was fourth in the 1500m and fifth in the 3000m. For the summer, Houlihan said she might aim at the US record at 1500m.

“If the race is there, that’s awesome,” she said. “I don’t know if that’s the main focus.”

WEATHER DELAYS
Late in the meet, there was a three-hour weather delay. That influenced Michael Normal to withdraw from a 200m that could have been among the highlights of the four-day championships.

Jarrett Eaton was third in 13.51 and world record-holder Aries Merritt fourth in 13.52.

JAGERS TOPS QUALITY DISCUS
Discus was once a strength of US throwers, but not lately. Mason Finley’s bronze in London last year was the first medal at a World Championships since Anthony Washington’s gold in 1999.

In an exciting competition on Sunday in which the lead changed several times, Reggie Jagers won with 68.61m, the best by a US thrower since 2011 and putting him fifth on this year’s world list. He was followed by Finley (67.06m) and Sam Mattis (66.32m). Not since 2000 had three US throwers exceeded 66 metres in the same competition.

Mattis broke Jagers’ stadium record of 64.59m with 65.45m in the first round and 66.32m in the third. Jagers then threw 66.92m at the end of the third round to reclaim the stadium record. Finley raised the record to 67.06m in the fifth before Jager reclaimed it (again) with 68.61m just moments later.

Elsewhere in the field, Sandi Morris successfully defended her pole vault title with a clearance of 4.80m. Katie Nageotte was second with 4.70m and 36-year-old Jenn Suhr third at 4.60m.

Maggie Ewen came from behind to win the shot put with 19.29m over Jessica Ramsey, second in a PB of 19.23m. Olympic champion Michelle Carter was sixth with 18.01m.

Shamier Little set a stadium record of 53.61 in the 400m hurdles, second on the world list to the world U20 record of 52.75 by Sydney McLaughlin, who skipped these championships. Little had previously won in 2015, the year she was the silver medallist at the IAAF World Championships.

Georgeanne Moline stumbled after she rolled an ankle coming off the last hurdle, and she was second in 54.12. Olympic bronze medallist Ashley Spencer tripped over the third hurdle, fell and did not finish.