Deanna Price broke the North American record in the hammer, while Shakima Wimbley equalled the world lead of 49.52 in the 400m to highlight the third day of the US Championships in Des Moines, Iowa. 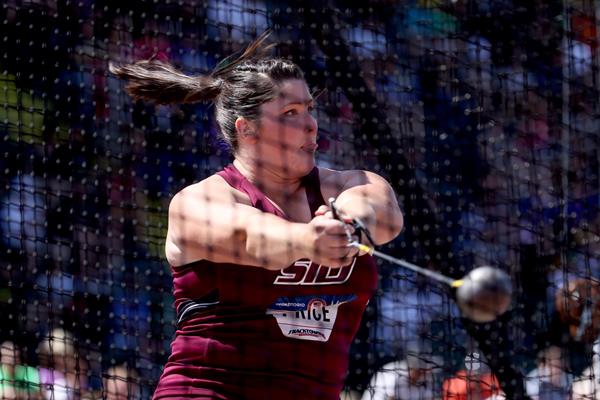 In the 1500m finals, Matthew Centrowitz signalled a return to form by winning his fifth US title, and Jenny Simpson’s bid for a fifth successive victory was foiled by Shelby Houlihan.

“Race to 80” is the way Price characterised her rivalry with Gwen Berry. The two former Southern Illinois University students are aiming at 80 meters, a milestone in the hammer heretofore achieved only by Poland’s Anita Wlodarczyk.

“We text each other all the time,” Price said of Berry. “We work well together.”

The 25-year-old Price led after each of six rounds and hit 78.12m in the fifth, breaking the North American record of 77.78m set by Berry in beating Woldarczyk on 8 June. Price, who climbed to No.4 on the world all-time list, followed with a 77.01m in the final round.

Price threw 77.65 at a small meeting in Idaho on 2 June to break Berry’s year-old US record of 76.77m. Six days later, Berry reclaimed the record.

“I have no doubt it will be broken again next year,” Price said.

Price said Berry has been “an inspiration”. Price said she lost 40 pounds – to 265 – and that has made all the difference. She is engaged to her coach, JC Lambert, a former Southern Illinois hammer thrower.

“I never underestimate the European girls. Never,” said Price. “They have more international experience than we do. It depends on the day.”

Saturday was Wimbley’s day. She dropped under 50 seconds for the first time in the 400m, breaking the Drake Stadium record and moving to seventh on the US all-time list. She now shares the world lead with Shaunae Miller-Uibo, who trains with Wimbley under coach Lance Brauman in Florida.

“I was in total shock,” said Wimbley, who earned silver at the IAAF World Indoor Championships Birmingham 2018 in March. “You put that up on your vision board, but you don’t expect that to happen so quickly. That’s my first year out of college, so that was far-fetched for me. To get it now, it’s just amazing. I can’t really explain it.”

Jessica Beard, who had her first PBs since 2009 this year, was second in 50.08. Kendall Ellis, whose dramatic anchor leg brought University of Southern California 4x400m and team titles at the NCAA Championships, was third in 50.37. World indoor champion Courtney Okolo was fourth in 50.65.

Training with Miller-Uibo has been motivating, Wimbley said. The 1.88m tall sprinter said she has attempted to improve her posture and core strength.

CENTROWITZ RETURNS TO TAKE FIFTH TITLE
Centrowitz, beset by injuries and illness in 2017 after winning Olympic gold in 2016, relied on his tactical brilliance to win a fifth US title in the 1500m. He is the first to win that many since Steve Scott won six between 1977 and 1986.

“At this point in my career, I just want to keep checking off boxes,” Centrowitz said. “Leave my mark in the 1500m in the US.”

He had to swing wide to get in position with more than a lap left, but his 53.59 closing lap was enough to pull away to victory in 3:43.67. Afterwards, he held his hand to his ear to mimic a phone call. He said he was sending a message to someone he would not identify.

The other 1500m came down to a sprint between two women both born in the state of Iowa. Simpson went in with an 11-1 record at Drake Stadium, including 8-0 since 2010. But she could not hold off Houlihan, who also overtook Simpson to win at the IAAF Diamond League meeting in Eugene on 26 May.

In another distance final, Emma Coburn and Courtney Frerichs went 1-2 in the 3000m steeplechase, reprising their finish from last year’s IAAF World Championships. Coburn’s time was 9:17.70, and not until past the final water jump did she pull away from Frerichs, 9:18.69. They broke the stadium record of 9:29.20 set in 2008 by Simpson.

The US title was the seventh for Coburn, extending her own record, and fifth in a row.

Harper Nelson, after finishing fifth in 12.93, was tearful afterwards in an interview televised by NBC. She has gold and silver medals from the Olympic Games, plus two World Championships medals.

“I’ve had such an amazing career, and I can’t be upset about what God has given me, the talent,” she said. “And the field in the US is just sick. So to hear people call my name, it’s like, ‘I made an impact’. And that’s really what you want in the sport.”

World champion Sam Kendricks won a fifth consecutive title in the pole vault, tying the record of Bob Richards (1948-52) and Cornelius Warmerdam (1940-44). Kendricks vaulted 5.85m to break the stadium record of 5.83m he set on 27 April at the Drake Relays. 20-year-old Chris Nilsen was second with 5.80m.

Olympic gold medallist Ryan Crouser failed in a bid to become the first shot putter to win three US titles in a row since Al Feuerbach (1973-75). Darrell Hill, who was 1-13 in the previous 14 meetings against Crouser, finished first with 21.57m. Crouser, who had the top 23 marks by a US thrower this year, managed 20.99m on his only valid attempt.

Roy Jordan for the IAAF