University of Southern California produced the greatest one-lap racing in collegiate history – or at any level of athletics – during the penultimate day of the NCAA Championships on Friday (8) in Eugene, Oregon. 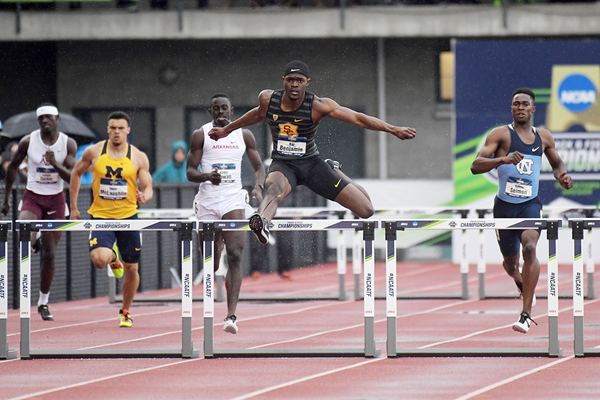 “It was a special moment for all of us as a team,” Norman said in an ESPN interview after the relay.

Four meeting records fell on Friday, including University of Houston’s 38.17 in the 4x100m, on a rainy night with temperatures of 16-18C. All four also were records for Hayward Field, which has held the Prefontaine Classic, six US Olympic Trials and multiple USA and NCAA championships.

First up was the 20-year-old Norman, who set a world indoor record of 44.52 (pending ratification) at the NCAA Indoor Championships on 11 March. He stayed in step through the first 200 metres with Jamaican duo Akeem Bloomfield and Nathon Allen, both of Auburn University, who were in lanes five and six. Norman, in lane four, didn’t pull away until the closing 80 meters.

Of the five men ahead of Norman on the world all-time list, four of them – Wayde van Niekerk, Michael Johnson, Jeremy Wariner and Quincy Watts – are Olympic gold medallists. The other, Butch Reynolds, was a world indoor champion.

“I don’t think about the future or the past too much,” Norman said. “It’s about the present.”

That worked for Benjamin, also a 20-year-old.

He maintained his 13-step pattern all the way around and matched the 47.02 by Edwin Moses from 1983 in Koblenz, Germany. That was the last of Moses’ four world records. Kevin Young’s world record of 46.78 has stood since the 1992 Barcelona Olympics.

“Coach Caryl said all season, ‘It’s going to rain in Oregon, so prepare yourself’,” Benjamin said. “She just told me to come out and execute and run my race plan. I did that, stuck through it. Forty-seven-oh speaks for itself.”

At the NCAA Indoor Championships earlier this year, USC’s 4x400m team ran quicker than the world indoor record, but their time was not eligible for a record because Benjamin represents Antigua and Barbuda, the birthplace of his parents and the country he represented at the 2013 World U18 Championships. For such records, all runners must represent the same country. Benjamin was born in New York state.

“I dedicated that race to my teammate, Brian Barraza,” Cameron Burrell said.

Barraza, making a bid for team points, led the steeplechase until tripping over a barrier on the last lap. He dropped to a non-scoring 10th. Houston’s 35 points were still worth third place for the school’s highest finish since 1959.

In the field events, the winners were 19-year-old Indian high jumper Tejaswin Shankar, 2.24m, Algerian triple jumper Tahar Triki, 16.79m, and discus thrower Luke Vaughn, 60.41m. Vaughn qualified for the final with that third-round throw and made it stand up to become University of Memphis’ first NCAA champion in any event since 1981.

University of Georgia won its first men’s team championship with 52 points and will try to add a first women’s outdoor title on Saturday. Pre-championships favourite Florida was second with 42, followed by Houston and USC. Florida has finished in the top four for 10 consecutive years.