Defending champion Maria Guadalupe Gonzalez of Mexico produced a storming last five kilometres in the 20km to become the first senior woman in the history of the championships to win back-to-back titles at the at IAAF World Race Walking Team Championships Taicang 2018 on Saturday (5). 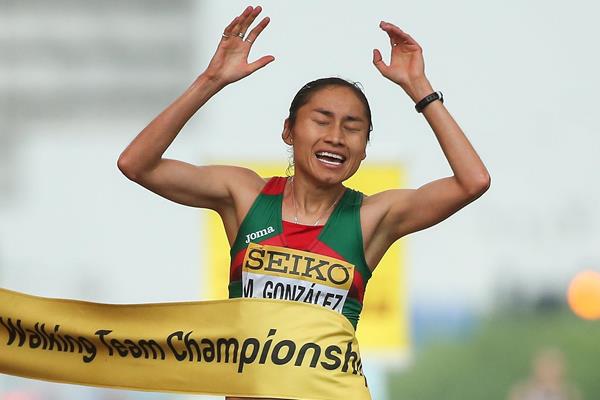 The 29-year-old Mexican took just 20 minutes and 27 seconds to cover the last five kilometres of the race. In fact, her split from 14km to 19km was three seconds faster, as she apparently eased down once she realised she had an unbeatable lead in hand in the last kilometre.

However, because Gonzalez was relatively conservative in the opening 14 kilometres, her winning mark of 1:26:38 just fell 21 seconds short of her career best time, which was achieved from her victory in this event two years ago in Rome and has stood as the continental record ever since.

China’s Qieyang Shijie clocked 1:27:06 in front of a jubilant home crowd to add another silver medal to her tally, following medals of the same colour at the last edition of this event two years ago and at the 2012 Olympic Games.

Highly-favoured local race walker Yang Jiayu, who outraced Gonzalez in the home stretch to claim the world title last year in London, had to settle for the bronze medal in 1:27:22.

The race began at 16:30pm under cool conditions with light rain falling from time to time. But the 10-loop contest got off to a relatively slow start as no one seemed keen to set the pace in the early stages.

After the congested lead pack covered the first kilometre in 4:45, Brigita Virbalyte-Dimsiene of Lithuania took a short-live sole lead and was swallowed up by the pack after just one kilometre.

The first five kilometres was covered in 22:35 by a leading group of more than 20 race walkers.

The Czech Republic’s 2014 world U20 champion Anezka Drahotova, who holds the national record of 1:26:53, put in a surge before nine kilometres. This time only eight other women managed to keep up with the tall Drahotova.

The leading nine remained together for another five minutes with Gonzalez walking a vest ahead of the others for most of the time. Once the pack finished the seventh lap, the Mexican launched her powerful charge. She needed just 4:06 t0 finish the next kilometre with the leaders being trimmed to only four including Qieyang, Yang and Brazil’s Olympic bronze medallist Erica De Sena.

As Gonzalez continued to push ahead, the Brazilian dropped off the back first and then Yang quit the battle for the title.

Gonzalez had virtually clinched the gold medal when she broke clear of Qieyang coming up to the 16-kilometre mark. But Gonzalez kept extending her advantage and finished the 17th kilometre in just four minutes, leaving Qieyang 14 seconds in arrears, before wrapping her convincing triumph.

“In fact, I had reached this speed (four minutes per kilometre) before,” said Gonzalez, who covered the second half of the race in 41:58 after an opening half of 44:40. “It’s not my fastest speed yet.

“I felt sick after the race mainly because of the humid weather,” she added. “I always respect the Chinese racers. And China is strong as a team. The Chinese racers are all tough and competitive. I’ve lost (to the Chinese athletes) in previous races. But it is the desire to win that has brought me here today.”

Behind the medallists, De Sena finished fourth in 1:28:11 while Eleonora Giorgi made up for her last-minute disqualification two years ago by placing fifth in 1:28:31. Drahotova was sixth in 1:28:40, her fastest time in three years.

Although they missed out on individual gold, the hosts comfortably won the team title. Italy took the silver medal with 38 points while Spain grabbed the bronze with 40.

Vincent Wu for the IAAF