For the best part of five days, field events had dominated the Commonwealth Games, but three pulsating races to close the day five programme redressed the balance between track and field. 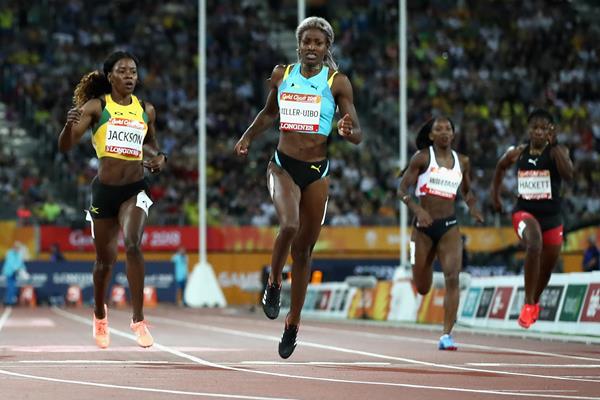 It was something of a stacked deck. Thursday night at Carrara Stadium closed with three of the strongest events – the men’s and women’s 200m, and the men’s 800m.

Only one went to form – Shaunae Miller-Uibo winning the women’s 200m – but it was upsets, thrills and near-spills in all three races.

Jackson, the Olympic 400m bronze medallist, ran a personal best of 22.18 to take the silver with Dina Asher-Smith just edging Elaine Thompson to take the bronze, 22.29 to 22.30, so this was a race of some pedigree.

The men’s final was next up, and it was a battle royal on all fronts. Zharnel Hughes looked to have it won when he edged Jereeem Richards at the line, both clocking 20.12. That was thrilling enough. Only twice in recent Games’ history – Allan Wells and Mike McFarlane in Brisbane in 1982, who dead-heated in 20.43, and Omar Brown and Stephane Buckland who ran the same time in Melbourne in 2006 with Brown the winner – have two men run the same time in the 200m.

But the drama was not over. Hughes had made contact with Richards, his arm striking the Trinidadian’s chest as they both veered towards the edge of their lane some 20 metres from the line. Richards had to struggle to keep his feet.

Despite an appeal from the English team, Hughes was disqualified and Richards declared the winner. Canada’s Aaron Brown was second in 20.34 and Northern Ireland’s Leon Reid third in 20.55.

Nijel Amos was red-hot favourite in the 800m and looked to have it won when he beat off the challenge of Australia’s Luke Mathews on the back straight. But Kenya’s Wycliffe Kinyamal got to the front on the bend, teammate Jonathan Kitlitit joined in and suddenly there was a wall of runners contesting the medals.

Kinyamal proved strongest down the home straight, winning in 1:45.11. England’s Kyle Langford, who was still in fifth place with 100 metres remaining, charged home for second in 1:45.16 while Mathews, who had dropped back to sixth on the bend, worked his way through a wall of runners to get back up for third in 1:45.60, Australia’s first medal in the event since Kris McCarthy also took a bronze in 2002.

Amos, after leading for the first 500 metres, faded to eighth and last place.

It was almost three gold medals as Brooke Stratton was just nine centimetres behind Canada’s Cristabel Nettey in the long jump.

Stevens, the silver medallist at last year’s World Championships, threw a Games record of 68.26m to leave her closest rival, Seema Punia of India, almost eight metres adrift. She smashed the previous record, 65.92m by Beatrice Faumuina in Kuala Lumpur in 1998, by more than two metres.

The youngest ever world champion in the event, in Berlin in 2009, Stevens has enjoyed a strong resurgence since finishing fourth in the Rio Olympic final. She approached the 70-metre mark in taking the silver medal behind Sandra Perkovic in London last year and has continued in similar vein into 2018.

Marschall does not turn 21 until 25 April so is at the opposite end of the age and experience spectrum to Stevens. But he held his nerve to produce a clutch third-attempt clearance at 5.70m to defeat Canada’s Shawn Barber. Both men missed twice, Barber failed at his final attempt and then Marschall went over. He had three unsuccessful attempts at a would-be personal best and Games record 5.81m.

The women’s long jump took off slowly with several of the favourites fouling in the first round. Nettey, however, set down a marker with a 6.84m effort which would stand up all the way through the competition.

Stratton improved as she went along. A 6.72m put her second at half way, she crept up to 6.75m in round five and then 6.77m on her final jump, just seven centimetres short. Shara Proctor took the bronze with 6.75m as nine centimetres covered the three medallists.

MCMASTER’S GOLD FIRST-EVER MEDAL FOR BRITISH VIRGIN ISLANDS; RUSSELL WINS FOR JAMAICA
Kyron McMaster was fastest in the world last year in the men’s 400m hurdles, but his first World Championships experience was one to forget. Crossing the line of his first-round heat in a qualifying position, he was disqualified for a lane infringement.

McMaster’s Commonwealth Games debut was an altogether happier moment. Drawing well clear over the final two hurdles, he took the gold medal in 48.25, almost a full second clear of his closest rival.

It was the first medal of any colour for the British Virgin Islands at a Commonwealth Games. Jeffery Gibson of The Bahamas and Jaheel Hyde of Jamaica took silver and bronze respectively.

Janieve Russell drew level with Wanda Nel at the eighth hurdle and went clear up the straight to win the women’s 400m hurdles in 54.33. Eilidh Doyle also got past Nel to take silver in 54.80 while the South African held on for the bronze in 54.96.

It was the third hurdling gold medal for Jamaica, following Ronald Levy in the 110m hurdles and Aisha Praught’s surprise victory in the 3000m steeplechase the previous night.

Len Johnson for the IAAF