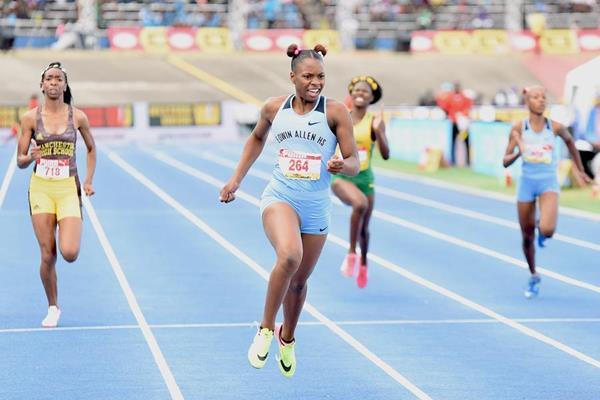 The championships produced more than 20 records with Davis and De’jour Russell leading the way with world-U20-leading performances. Davis, who topped the world U18 sprint lists last year, stamped her authority on proceedings on the afternoon of day three, despite the damp conditions.

Davis, 16, produced a high-octane performance in her 200m semi-final, smashing Anneisha McLaughlin’s 16-year-old record (23.13) en route to a 22.92 (0.6m/s) lifetime best. That run by the Edwin Allen High sprint sensation was not only the first sub-23-second run display at Champs since 2013, it was also the fastest time recorded in the world this year at the U18 and U20 levels.

She returned 24 hours later with another record-breaking performance in the 100m semi-finals where she registered 11.35, slicing 0.05 off Kimone Shaw’s record established in 2016.

Davis’s own 100m record lasted just five hours as she produced a devastating run in the final to win in 11.16 (0.9m/s), a mere 0.04 outside Veronica Campbell’s national U20 record. She completed the sprint double with another world-leading run, stopping the clock at 22.72 (0.8m/s), just 0.01 outside the national U20 record by Simone Facey.

Russell, the world U18 champion over 110m hurdles, produced a blistering run in the final to establish a championship record for the second straight year. The Calabar High School student clocked a world-U20-leading 13.10 (-0.8m/s) and along with teammate Orlando Bennett (13.30), who ran a personal best, secured maximum points. Russell’s time is 0.04 seconds outside Tyler Mason’s national U20 record.

The fourth day of the championships was filled with entertainment and drama.

After Davis’s stunning 100m victory, the crowd remained on their feet for the start of the boys’ U16 final. They were not disappointed as 15-year-old Sachin Dennis of St Elizabeth Technical, aided by a perfect wind (2.0m/s) sped to a national U18 record and world age-15 best of 10.20.

In the boys’ U20 100m final, both defending champion Michael Stephens and Jhevaughn Matherson, who false started last year, had a score to settle. Both looked in pristine condition throughout the rounds, but prior to the start of the final, Stephens began grimacing during warm-ups and required treatment which raised doubts of his participation.

The final got underway with Jamaica College’s Ryiem Robertson and Calabar’s Tyreke Wilson getting great starts. Matherson and Stephens had to play catch up and in doing so both athletes appeared to have suffered leg cramps almost simultaneously midrace and pulled up shortly afterwards. Wilson won in a lifetime best of 10.21 ahead of Robertson 10.28, who also ran a PB, with Wolmerian Xavier Nairne (10.42) completing the podium. Both Matherson and Stephens were inconsolable.

In the U20 400m hurdles, Rovane Williams of Rhodes Hall became only the third Jamaican high school athlete since Omar McLeod and Jaheel Hyde to dip under 50 seconds at the Championships. Williams, who initially looked in some sort of bother midrace, found a burst of speed to propel past early leaders Phillip Lemonious and Jauavney James en route to the title in a lifetime best of 49.94.

Shiann Salmon of Hydel High School successfully chased down world U18 silver medallist Sanique Walker of Vere Technical in the home straight en route to a championship record of 55.78 in the U20 girls’ 400m hurdles.

Salmon, who had won her 400m flat semifinal just a few hours before the 400m hurdles, went on to complete the double by clocking 52.05 to win the one-lap final.