Dalilah Muhammad won the deepest women’s 400m hurdles race in history and Ryan Crouser produced the longest shot put in the world for 14 years on Sunday (25) to highlight the fourth and final day of the US Championships in Sacramento. 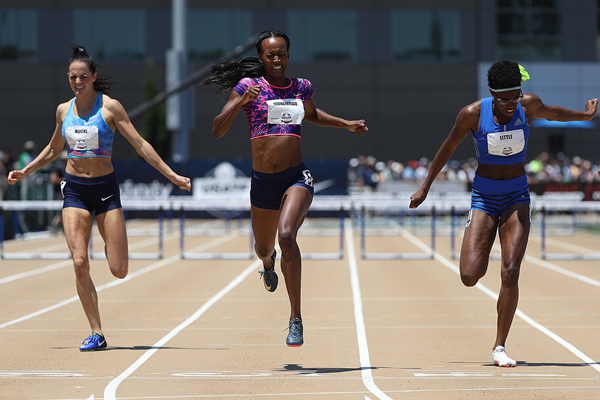 Both Olympic champions needed such performances to win in the selection meeting for the IAAF World Championships London 2017. Top three in most events qualified.

Last year Muhammad won Olympic gold in 53.13. On Sunday, that would have earned her fifth place.

For the first time in history, three women bettered 53 seconds and six finished inside 54 seconds in the same 400m hurdles race. The times achieved in third, fourth, fifth and sixth were the fastest ever recorded for those positions.

“Right now I just wanted to make the team, and that’s 100 percent honest,” said Muhammad. “Of course, every race I go out there trying to win. I knew it was going to be a fast race, and my coach was telling me to just go with it and trust that I will be able to finish. And that’s what I did.”

The other World Championships spots were claimed by Shamier Little, 52.75, and Kori Corter, 52.95. Neither made it to Rio. They will be joined in London by Cassandra Tate, who has a wild card as the 2016 Diamond Trophy winner.

Olympic bronze medallist Ashley Spencer improved her world-leading PB from 53.38 to 53.11, and yet was fourth and off the team. Georganne Moline was fifth in 53.14, and 17-year-old Sydney McLaughlin improved her own world U20 record to 53.82 in sixth.

In the men’s shot put, Crouser led through five rounds after four throws of 21.80m or farther, topped by his 22.02m. But in the last round, world champion Joe Kovacs seized the lead with a meeting record of 22.35m.

That record did not last long, though, as Crouser responded with 22.65m, the longest throw in the world since 2003.

“My dad and I used to play games when I was little,” explained Crouser. “He’d say, ‘OK, this is the sixth round of the Olympics, time to get your best throw now’. I knew I’d need a huge one after Joe’s throw, but once I got in the ring and set up, I knew I was in good position.

“The throw was actually lower than it should be. I’m sure when we look at the film, we’ll see that I had great velocity but not the best launch angle.”

Two-time world indoor champion Ryan Whiting claimed a World Championships team spot by finishing third with 21.54m. Darrell Hill, who placed fourth with 20.60m, will also make it on to the team as Kovacs holds a wild card.

LAWSON WINS DRAMATIC LONG JUMP FINAL
Some of the meeting’s biggest drama was in the men’s long jump, won by Jarrion Lawson with a wind-aided 8.49m (3.7m/s). Olympic champion Jeff Henderson, second after four rounds, was bumped all the way to fifth at 8.28m. Marquis Dendy was second with 8.39m (3.1m/s).

Damarcus Simpson and Jarvis Gotch were third and fourth, but their wind-aided jumps don’t meet qualifying standards for London, so Henderson could still make the US team for London if Simpson or Gotch fail to jump beyond 8.15m before the 21 July deadline. Lawson earned his World Championships standard with a wind-legal 8.27m in the last round.

Aleec Harris won the 110m hurdles in 13.24 (-1.7m/s) over two men making comebacks. World record-holder Aries Merritt, who has had a kidney transplant, was second in 13.31. Devon Allen, a former football player coming off knee surgery, was third in 13.34.

“I’m in much better health,” Merritt said. “I’m able to eat properly and train properly. You’re going to see some great times this summer. Today we were running into a headwind, and that’s tough for a guy who only weighs 160 pounds.”

Resilience was rewarded for Deajah Stevens, who won the 200m in 22.30 (-2.5m/s) over world leader Tori Bowie. Stevens was disqualified at the NCAA Indoor Championships after setting an apparent North American indoor record, and she wobbled in the stretch of the outdoor NCAA Championships on her home Oregon track and could not finish.

Twenty-year-old Donavan Brazier won a front-running 800m in 1:44.14. Isaiah Harris was second in 1:44.53 and Drew Windle third in 1:44.95. Olympic bronze medallist Clayton Murphy withdrew because of leg cramps he developed in Saturday’s 1500m final, according to a statement by his agent.

The lead in the heptathlon changed after each of the first five events as Kendell Williams and Erica Bougard were locked in battle. Bougard held the overnight lead, but Williams opened her day-two campaign with an outdoor PB of 6.49m in the long jump to regain pole position. A 44.97m throw in the javelin gave her a 78-point buffer going into the final event, but with Bougard being a superior 800m runner, the title was still to be decided.

Bougard crossed the line in first place in the 800m in 2:11.51, but Williams stayed within five seconds of her opponent and held on to the overall lead, winning with a PB of 6564. Bougard was rewarded with a PB of 6557 in second place, while Sharon Day-Monroe placed third with 6421.

Evan Jager, another Olympic silver medallist, won his sixth US title in the steeplechase with a time of 8:16.88.

Eric Futch won the men’s 400m hurdles in 48.18 over Michael Stigler, 48.26, and TJ Holmes, 48.44. Olympic champion Kerron Clement was seventh but has a World Championships wildcard, having won the Diamond Trophy last year.

By: Roy Jordan for the IAAF