Will Claye climbed to the No. 9 spot on the all-time triple jump list to highlight the second day of the US Championships in Sacramento on Friday (23). 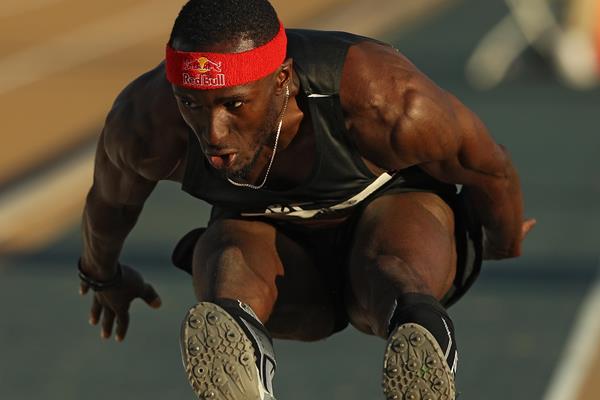 Claye, the two-time Olympic silver medallist, produced a superb series. Opening with 17.47m, the 26-year-old improved to 17.68m and 17.79, in the next two rounds, the latter just three centimetres shy of his personal best set at the Eugene leg of the IAAF Diamond League last month. He reached 17.76m in the fourth round before sailing 17.91m in the fifth to break into the world’s all-time top ten, and fourth among US athletes.

Behind him, runner-up Chris Benard and Donald Scott, who was third, also reached lifetime bests, reaching 17.48m and 17.25m respectively, to claim their spots on the London-bound national team.

Two-time Olympic champion Christian Taylor, the current world leader with 18.11m, intentionally fouled his only attempt. Taylor has a wild card for the IAAF World Championships London 2017, but rules require him to participate in the national championships to be chosen to the US team.

In the 100m, Justin Gatlin showed he’s not ready to let Christian Coleman succeed him as the United States’ premier sprinter.

Both Gatlin and Coleman were college sprinters at Tennessee. It seemed inevitable Coleman would overtake his elder this year after setting a collegiate record of 9.82, also a world leader, on 7 June. But Coleman said he was “reaching for the line” and said he must maintain composure.

Gatlin started evenly – his reaction time was .168 to Coleman’s .161 – and powered to victory in the closing stages against a slight headwind (minus 0.7 mps). Afterward, Gatlin said he wanted to race Usain Bolt one more time.

IMPRESSIVE WINS FOR BOWIE, CUNNINGHAM AND CHELIMO
Elsewhere, Tori Bowie won the women’s 100m, Vashti Cunningham set a North American junior record of 1.99m in the women’s high jump, Paul Chelimo set a meet record of 13:08.62 in the 5000m, and Clayton Murphy remained on track for a historic 800m/1500m double.

Bowie, who went home with three Olympic medals last year, dominated the women’s 100m in 10.94, the second fastest of the season for the Rio silver medallist.

“The goal today was to finish top three, so finishing first is great,” Bowie said. “I’m extremely excited and I still feel like I have a ton to work on before Worlds because I really hope to do well.”

CUNNINGHAM EQUALS 1.99M PB
In the high jump, the 19-year-old Cunningham had a clean sheet through 1.94m, then cleared 1.99m on her second attempt. It was highest by an under-20 jumper since 1989 and equalled her PB from the IAAF World Indoor Championships Portland 2016.

Chelimo, silver medallist behind Mo Farah in the 5000m at Rio, knocked more than four seconds from the previous record of 13:12.76 set by Tim Broe in 2005. It was a solitary run by Chelimo, whose opening lap was 61 seconds.

“I’m just trying to improve every year. I’m not looking at anybody,” said Chelimo, 26. “Tonight I was trying to test myself to the limit.”

The 22-year-old Murphy meanwhile is attempting to be the first to win an 800m/1500m double since Glenn Cunningham in 1933. (Rick Wolhluter won both at the 1976 Olympic Trials, but those were not considered the nationals.) Murphy, an Olympic bronze medalist at 800m, was second in his semifinal in 1:45.70 to reach Sunday’s final. He meets Olympic gold medalist Matthew Centrowitz in Saturday’s 1500m final.

HARDEE COLLECTS FOURTH NATIONAL TITLE
In absence of the retired Ashton Eaton, the decathlon was won by Trey Hardee, a two-time world champion. It was Hardee’s fourth US title, eight years after his first — a record for most years between wins. Hardee, 33, finished with 8225 points after a scare in the pole vault, in which he needed a third-attempt clearance at his opening height of 4.90m.

“Here is the thing. I never went anywhere, so I am not back,” Hardee said. “I am just old. A lot has happened, weird injuries. If they happen earlier in my career, maybe they are derailers and I never get off the ground.”

World record-holder Kendra Harrison, in her first race since breaking a bone in her hand on 5 May at Doha, won her heat of the 100m hurdles in 12.54, fastest in the world this year.

In a Thursday final, Galen Rupp not only had his streak of eight consecutive titles in the 10,000m end. He finished fifth and did not make the world team. Rupp had suggested this would be his final race on the track but backed away from that in comments to The Oregonian.

IN OTHER STORYLINES:
Out in the first round of the 100m were Trayvon Bromell and Tyson Gay. Bromell, 21, the 2015 world bronze medallist, was third in his heat in 10.22 in his first race after an Achilles injury. Gay, 34, was third in another heat in 10.17. He was racing eight months after the death of his 15-year-old daughter, Trinity. Beginning in 2005, Gay had qualified for every Olympics and World Championships, except in 2011 (he was taken off the 2013 team for failing a drug test).

Gabe Grunewald, a cancer survivor who is fighting cancer yet again, ran her 1500m heat anyway and was slowest of 28 entries in 4:31.18. Runners surrounded her afterward in a circle of prayer and support.

In the women’s 800m, Alysia Montano, due to deliver her second child in November, ran while pregnant at nationals for a second time. She was slowest of 30 in the first round in 2:21.40. She ran while eight months pregnant in 2013. Montano, 31, a six-time outdoor national champion, was fifth at the 2012 Olympics but missed out on Rio last year after being tripped in the closing 200 meters at the US trials.

Also announcing her retirement was Stephanie Brown-Trafton, 37, the 2008 Olympic gold medallist in the discus. She was 10th with a distance of 52.23.