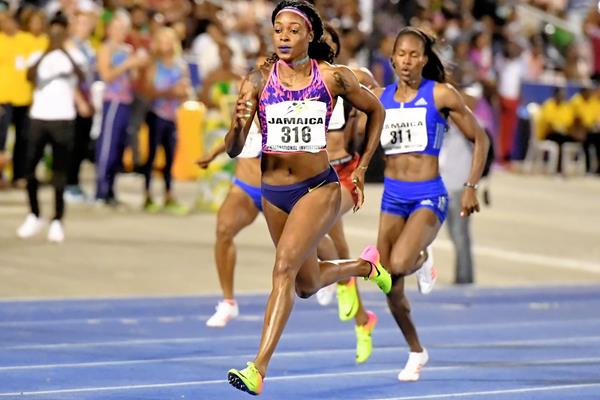 Thompson, sandwiched between Shericka Jackson in lane four and Shalonda Solomon in six, ran a blinding curve before transitioning into the home straight where she demonstrated a relaxed execution of pumping arms and high knees en route to a 22.09 (0.5 m/s) performance to equal the world lead and establish a new meeting record.

“I just listened to coach’s instruction, he told me to come off the curve as early as possible and control my race from there,” Thompson said.

“It’s been a hectic season. I’m coming all the way from Shanghai to come here and run another fast time. I just need to continue to stay focused and put in the work.”

The men’s equivalent also saw a dominating run and welcome return to form from triple Olympic medallist Ande DeGrasse who led gun to tape in a season’s best 20.14 (1.2 m/s). 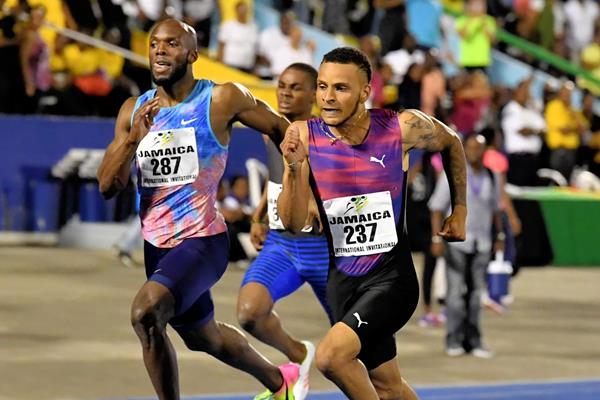 “Preparation has been a bit slow this year as I started training late, so I’m trying to find my fitness, my shape and working on my top end speed,” the Canadian said.

“I tried to go out there and execute the first 150 metres but it was one of the toughest races I’ve ever done and I now know I have to go back and train a lot harder.”

Meanwhile runner-up LaShawn Merritt was satisfied with his 20.28 performance.

“I came out injury free,” said Merritt who ran a season’s best doing just enough to hold off the fast-finishing Zharnel Hughes by a scant 0.01. Merritt confirmed that he’ll be chasing a 200/400m double at the world championships in August.

“I have a bye for the 400m because I won Diamond League (in 2016) and so I don’t have to qualify (for the world championships) at US trials. So I have the luxury of running the 200 there (Sacramento) and also because of the change in the world championships schedule it’s possible to do the 200m/400m double. I’ll get a little more rest this time so I’ll attempt it in London.”

MCMASTER BLASTS 47.90 WORLD LEAD
Twenty-year old Kyron McMaster of the British Virgin Islands put on a masterful display in the men’s 400m hurdles. McMaster, bronze medallist at the IAAF World U20 championships last year, was responsible for the biggest shock of the night when he dispatched, with consummate ease, a world class field en route to a national record, meet record and world leading 47.80. 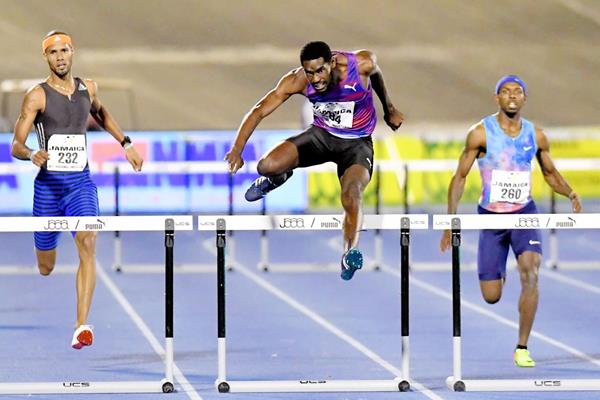 Two-time world U20 champion Jaheel Hyde was second with a 48.52 PB while Bershawn Jackson rounded out the podium after equalling his 48.63 season’s best.

BLAKE AND AKINOSUN TAKE 100M WINS
2011 world champion and London double Olympic silver medallist Yohan Blake sent a strong reminder that he will be a clear and present danger this season after he cruised to a 9.93 season’s best for his first victory of 2017.

“I’ve been working hard and wanting to run for so long,” said Blake, a long-time training partner of Usain Bolt’s.

Ronnie Baker of the US finished strong to claim second with a 9.98 PB, edging compatriot Mike Rodgers who improved his season’s best to 10.02.

The women’s 100m was a closer affair. Christania Williams had a bullet start while Allyson Felix on her immediate right was two strides behind. Felix and Morolake Akinosun began to chisel into the lead with Shillonie Calvert-Powell also mounting a challenge on the inside.

Trinidad & Tobago’s Michelle-Lee Ahye’s top end speed kicked in and she joined the party in earnest with twenty metres to go before the top-three blanket finish. Akinosun, Ahye and Felix were nearly inseparable at the line, with Akinosun getting the nod by 0.01 in 11.06.

“It was a decent effort, still a lot of work to be done but it’s always good to compete in Jamaica,” said Felix, who contested her first 100m race in two years.

Nelvis believes she’s on target for something special this season. “In every race I try to improve something and this one was very important. I expected to win though I wasn’t focused on the time because this year is all about winning for me and I know fast times will come with winning.”

Aleec Harris streaked away with the men’s 110m hurdles in a smart 13.22 (0.3 m/s) ahead of countryman Devon Allen who was challenging intensely before losing momentum after clipping the ninth hurdle. Allen was second in a season’s best 13.28.

WILLIAMS-MILLS AND GAYE TAKE 400M WINS FOR JAMAICA
Novelene Williams-Mills brought the home crowd to its feet with an emotional victory in the women’s 400m clocking 50.54. The 35-year-old, who’ll be retiring after this season, had not won this event since 2012.

“It feels good to come home and run a fantastic race one last time. I think I’ve done enough for the past 10 years and it’s time to walk away,” said Williams-Mills with a tinge of sadness and finality.

Rising quarter-miler Demish Gaye continues to impress with a composed victory that belied the fact that he started athletics four years ago at age 20. Biding his time until the final 100 metres, Gaye took a 45.08 win over Kevin Borlee and Tony McQuay, who clocked 45.52 and 45.73 respectively.

In the men’s pole vault Rio bronze medallist Sam Kendricks took his fifth outdoor victory this season in as many starts with a 5.80m clearance, adding 20cm to the meet record on his first visit to the Caribbean.

And in the discus, world leader Frederick Dacres took the win with 66.36m, nearly two metres ahead of US thrower Andrew Evans who reached 64.48m.