Maria Guadalupe Gonzalez will start the defence of her IAAF Race Walking Challenge title on home soil as the 10-race Series continues Sunday (12) in Ciudad Juarez, north of Mexico. 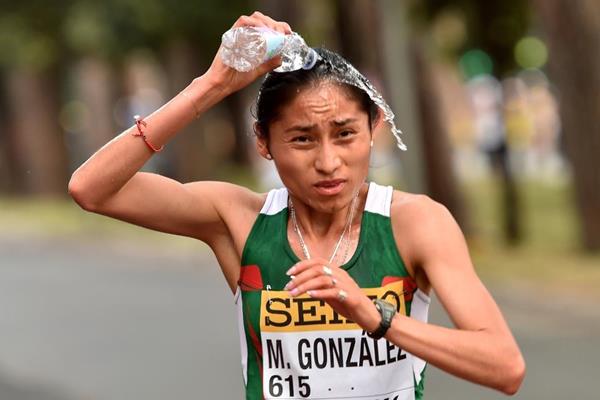 The 28-year old former boxer led Mexico’s resurgence in race walking as she claimed silver at the IAAF World Race Walking Team Championships in Rome and a historic silver at the Olympic Games in Rio de Janeiro, the first ever by a Mexican female race walker and the country’s first athletics medal at the Summer Games since 2004.

Gonzalez has won the past two Mexican legs of the IAAF Race Walking and will be joined this weekend by the other two medallists from 2016: Portugal’s Ines Henriques and Brazil’s Erica de Sena.

Henriques established the first official women’s world record for the 50km race walk, covering the distance in 4:08:26 on 15 February.

The 36-year old has been a regular feature in the Mexican event of the Challenge. Winner three times between 2011 and 2013, she has also stepped on the podium on three other occasions in Mexico since her debut in this event in 2008, including a bronze at the 2010 World Cup.

De Sena, who also enjoyed a breakthrough season last year, should also be in the mix for the top spots. She improved her South American record from 2015 by almost two and a half minutes, to 1:27:18, when claiming bronze at the IAAF World Race Walking Team Championships in Rome. She went on to finish seventh at home at the Rio Olympics. Overall, she registered the fastest four times in her career in 2016.

Australia’s Regan Lamble, the first Challenge leader after her win at the Oceania Championships last month, is also aiming at the top places, as well as Guatemala’s 2011 Pan American Games champion Jamy Franco, Colombia’s Sandra Arenas, winner of the Mexican event and Portugal’s Ana Cabecinha, a podium finisher in Mexico in 2013-2016.

Alana Barber of New Zealand, fourth at the Oceania Championships, is also registered.

Following up on Maria Guadalupe Gonzalez’s success, Mexican men also had an unprecedented season, when eight men went under 1:21 hours in 2016, led by Omar Pineda and Jesus Vega, ranked seventh in the world in 2016 thanks to their 1:19:20 performance.

The local contingent also features title defender Horacio Nava, who will be competing in his home state of Chihuahua, as well as Ever Palma and Eder Sanchez, past winners of the event in Chihuahua, before it moved to Ciudad Juarez in 2016.

Sanchez, bronze medallist at the IAAF World Championships, is the only Latin American to win the challenge, back in 2009. He has been the most successful man in the Mexican leg of the series, with previous victories in Chihuahua in 2008, 2009, 2011, 2012 and 2015.

Ciudad Juarez will also host one of the most successful race walkers in recent history. Winner of four Olympic and three World Championships medals, Jared Tallent of Australia returns to compete in Mexico for the eighth time. He stepped on the podium three times: third in 2009, second in 2012 and bronze at the 50km when the city hosted the IAAF World Cup.

Ben Thorne of Canada, the 2015 world bronze medallist over the distance, is also on the slate.

Brazil’s Caio Bonfim, fourth at the Rio Olympics, Canada’s 2015 Pan American Games champion Evan Dunfee and Colombia’s Eider Arevalo, winner of the Mexican leg in 2014, should also be in contention for the top positions, as well as Ecuador’s Andres Chocho, who set a South American record when winning the 50km in Ciudad Juarez last year.

A total of 168 athletes from 18 countries are registered to compete over two distances in Ciudad Juarez: 10km for juniors and 20km for the elite category. The races will be held over a two-kilometre loop course on Paseo Triunfo de la Republica. A moderate altitude of 1100m above sea level should not be conducive for fast times.

Many of these athletes will travel a week later to Monterrey, also in Mexico, for the third stop of the Challenge, where the 50km will be contested.

Mexico has been a host of the IAAF Challenge since its inception in 2003. After hosting a leg of the Challenge in Chihuahua annually since 2007, the race moved to Ciudad Juarez for the 2016 edition.

The 10-event Series will also travel to Asia, South America and Europe over the next five months before its conclusion at the IAAF World Championships in London.