Ten world leads and numerous records were broken at the Millrose Games in New York City on Saturday (11).

As is tradition, the meeting is scheduled to climax with the men’s Wanamaker Mile, the final event on the programme. But the highlight of this year’s meeting – for the home crowd at least – came in the penultimate event, the women’s 800m. 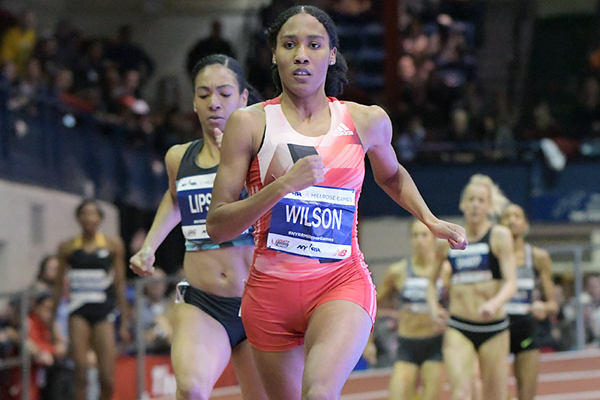 USA’s world indoor silver medallist Ajee Wilson ran close to the pacemaker for the first two laps, covering the first 400m in 57.42. She then took up the running and passed through 600m in 1:28.18 with Charlene Lipsey close behind. Wilson finished strongly and stopped the clock at 1:58.27, taking almost half a second off the North American indoor record set by Nicole Teter in 2002.

“My coach (Derek Thompson) and I don’t try to go after records,” said Wilson. “But before the race he said, ‘Go run your race’. It wouldn’t make sense to not take a crack at it. The last two weeks have been going really well and the training has been great. I know what kind of shape I’m in and it’s all about opportunities.”

Lipsey finished second in 1:58.64, also inside the previous North American indoor record. It was her first sub-two-minute performance under any conditions and is almost two seconds quicker than her outdoor best. In sixth, world U18 and U20 champion Sammy Watson broke the long-standing North American U20 indoor record with 2:01.78.

World indoor 1500m champion Sifan Hassan rebounded from a couple of early-season defeats to win the mile with one of the fastest performances in history.

The world bronze medallist sat in third or fourth place during the first half of the race but then hit the front once the pacemaker dropped out. She hit the 1500m mark in 4:03.05 and went on to cross the finish line in a Dutch record of 4:19.89, moving to fourth on the world indoor all-time list.

Olympic 800m finalist Kate Grace overtook US compatriot Shannon Rowbury in the closing stages to take second place in 4:22.93, 0.12 ahead of Rowbury.

Just 20 minutes before Wilson’s 800m victory, another North American indoor record was broken. Olympic 4x400m champion Courtney Okolo powered away from the field in the 500m to stop the clock at 1:07.34, the third-fastest time in history and just 0.97 shy of the world indoor best.

OLYMPIC CHAMPIONS IMPRESS
Making her 2017 debut and competing under her new married name, Olympic 400m champion Shaunae Miller-Uibo sped to victory in the 300m in a Bahamian record of 35.71. Her performance tied Quanera Hayes’ world lead, moving her to equal third on the world indoor all-time list.

Olympic champion Ekaterini Stefanidi produced the best pole vault mark of 2017 to defeat Olympic silver medallist Sandi Morris. The Greek cleared all heights up to and including 4.82m on her first attempt before bowing out with three misses at 4.92m. Morris equalled her season’s best of 4.72m.

Ford Palmer paced the field through the first mile in about 4:07.5. Soon after, Britain’s Olympic 5000m finalist Andrew Butchart hit the front and led for four laps. With 800 metres remaining, True moved up from eighth to fourth.

World indoor 3000m silver medallist Ryan Hill led at the bell, but True had the superior finishing speed and he went on to break the tape in 8:11.33, just 0.23 ahead of Hill. The two men moved to second and third on the US all-time list. Butchart took third place in 8:12.63, while Olympic 1500m champion Matthew Centrowitz faded in the closing stages and finished a distant seventh in 8:21.07.

Centrowitz wasn’t the only US middle-distance Olympic medallist to suffer a defeat on Saturday night.

Eric Jenkins held off a strong challenge from Olympic 800m bronze medallist Clayton Murphy to win the Wanamaker Mile in a world-leading 3:53.23. Jenkins was tucked behind the pacemaker for the first five laps and then maintained the lead for another lap before Kyle Merber hit the front with 200 metres to go.

Jenkins didn’t panic, though, and regained the lead on the last lap to take the victory. Muphy moved up from fourth to second but could not quite catch Jenkins, settling for a PB of 3:54.31.

Vernon Norwood won the men’s 500m in 1:00.11, the third-fastest indoor performance in history and just 0.05 shy of the meeting and North American record set two years ago by Brycen Spratling. Dezerea Bryant equalled her PB of 7.12 to win the women’s 60m.