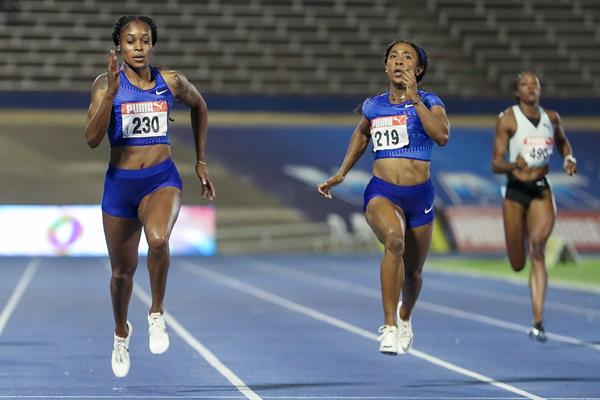 Following their phenomenal performances in the women’s 100m on Friday, Elaine Thompson and Shelly-Ann Fraser-Pryce enthralled spectators again on the final day of the Jamaican Championships in Kingston on Sunday (23).

Both women faced off in a mouth-watering 200m final. Fraser-Pryce, drawn in lane four, and Thompson in lane five ran aggressively around the top bend and quickly separated themselves from the rest of the field. Thompson, the double Olympic sprint champion, moved ahead of Fraser-Pryce with 70 metres to go and maintained a two-metre lead to win in a world-leading 22.00 with Fraser-Pryce registering 22.22, her fastest time since her victory at the 2013 IAAF World Championships.

“It was a good run,” said a smiling Fraser-Pryce. “Congratulations to Elaine, she’s a 21.6 runner, I knew she was going to go. My aim tonight was to get a season’s best or a personal best after seeing that I ran 10.73 on Friday night. It has been an extraordinary year so far and I am grateful for the opportunity to continue representing Jamaica.”

Rasheed Dwyer turned the tables on Yohan Blake in the men’s 200m in dramatic fashion. Blake seemed in command after coming into straight leading by a metre, but he was unable to shrug off the unrelenting challenge of Dwyer who surged by him at the tape. Dwyer ran a 20.23 season’s best with Blake a mere 0.04 back. Akeem Bloomfield’s decision to step down in distance proved a bridge too far as he could place no higher than fifth in 20.81.

Shericka Jackson produced her first sub-50-second run in three years to land the women’s 400m crown. The Olympic bronze medallist ran reservedly before shifting gears as she came off the top bend, going on to win in a PB of 49.78. Anastasia Le-Roy was a distant second in a season’s best of 50.94.

“I am feeling pretty good,” said Jackson, who focused on the 200m last year. “Right now I am happy with everything that is going on and trying to stay focused. I remember at the London World Championships, I sat on the steps waiting to see if I made the final. It was a learning experience for me that broke me down mentally and I promised myself that it would never happen again.”

The absence of sub-44-second performer Bloomfield, training partner Nathon Allen and 2018 champion Christopher Taylor took some sheen away from the men’s 400m. But Demish Gaye, a runner-up for the past two years, ran superbly to capture his first title, winning in a season’s best of 44.83.

“My coach and I have been working on my race strategy and I just came out here tonight and executed,” said Gaye. “The time was a bit surprising because the season started out slowly for me as I was bothered by injuries but I am over that now.”

Commonwealth champion Ronald Levy held off a strong challenge from world U20 silver medallist Orlando Bennett in the men’s 110m hurdles final. Levy won in a season’s best of 13.23 (1.5m/s) just ahead of Bennett whose 13.27 shaved more than half a second off his previous best. “I came out here as the youngest in the field and basically the most inexperience but I put my mind to it and got it done,” said an ecstatic Bennett.

DRAMA IN 100M HURDLES AND DISCUS

There was plenty drama in the blocks during the women’s 100m hurdles final as 2015 world champion Danielle Williams false started. The decision did not go down well with Williams, who refused to leave the track, resulting in a lengthy delay and ultimately forcing the meet organisers to abort the event.

Williams had won her heat earlier in the day in 12.81 but Janeek Brown was the fastest overall with her 12.68 clocking in heat one.

Elsewhere, Traves Smikle defeated world leader and Commonwealth champion Fedrick Dacres in the men’s discus. Smikle threw 63.66m in the first round, which would have been sufficient for the win, and then improved on that mark with 64.50m in the final round. Dacres, who threw a Commonwealth record of 70.78m last week in Rabat, managed 63.49m in a competition where he appeared to struggle with his footing, registering three fouls.

“It is always good being the national champion, this was a very serious trial,” said Smikle. “The distance was not great but I had already achieved the qualifying mark and my aim was to come here and ensure I made the top three.”

“I would like to congratulate my training partner Traves on his victory,” said Dacres. “This was the best field of discus throwers Jamaica could ever ask for. The evening conditions and atmosphere were good for the competition, but the ring hindered us. It was like throwing on glass, there was no traction and throwers really do not work well on glass. Therefore, we had to be cautious today while taking care of business and qualifying for the World Championships. But it’s disappointing that we could not throw far and show Jamaica what we had.”

In the women’s triple jump, Shanieka Ricketts won her second domestic title, bounding out to 14.73m (0.0m/s) just three centimetres off her lifetime best. World indoor silver medallist Kimberly Williams was the best of the rest, reaching 14.39m in the final round.