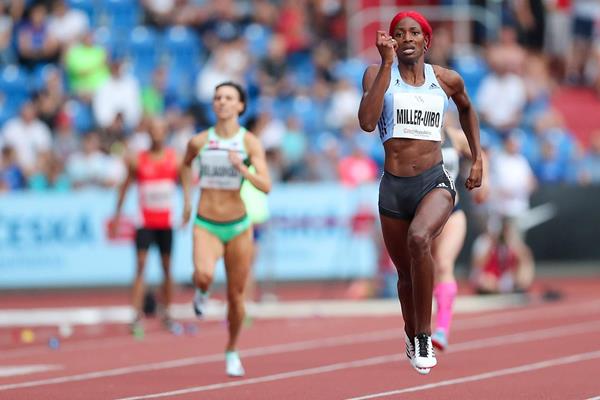 On the track, Miller-Uibo’s assault on the world best over the rarely contested 300m distance went off as expected, the Bahamian entering the straight with a clear lead, one she padded through the finish to clock 34.41, smashing the previous best of 35.30 Ana Guevara set at altitude in Mexico City in 2003. This performance, coupled with an early season 49.05 world lead in the 400m, indicates the 25-year-old is probably in the best shape of her career.

Brittany Brown of the US was a distant second in 35.91.

A torrential downpour late in the meet postponed the start of the evening-capping 200m, but didn’t dampen the performances that much. As expected, Christian Coleman, the 100m world leader, got off to a strong start, an early assault that caught up with him with about 50 metres to go. Over the final 10 metres, Andre De Grasse caught him as well, nipping him at the line in 19.91, a season’s best, 0.06 clear of the American who was making his 2019 debut over the distance. Further back, South African Clarence Munyai was third in 20.31, also a season’s best.

The 400m was anything but close, with Steven Gardiner prevailing in 44.95, nearly a second ahead of Bahrain’s Abbas Abubaker, who clocked 45.86.

MEETING RECORDS FOR KENDRICKS AND WALSH

World champion Sam Kendricks increased his unbeaten streak to six with a dominating victory in the pole vault. The Olympic silver medallist cleared 5.93m on his second jump, watching the bar bounce on the pegs but stay on as he fell back to earth. That added a centimetre to the meeting record set by world record holder Renaud Lavillenie in 2013.

Two-time world champion Tom Walsh dominated the shot put, collecting the win with a 22.27m toss in the second round to improve his season’s best by nine centimetres. He underscored his improving form with a 22.19m toss in round three.

While the rain and wind that descended on the eastern Czech city impacted much of the late-meet programme, the men’s long jumpers were affected the most, with the competition halted before the sixth round concluded. Juan Miguel Echevarria coped best, reaching 8.32m in the second round. Miltiadis Tentoglou of Greece was second at 7.95m.