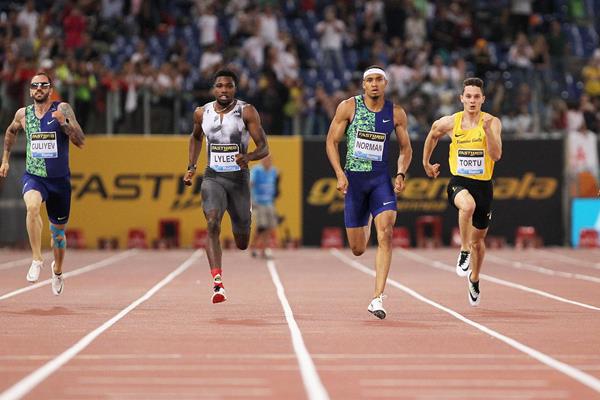 At a meeting that is named after Pietro Mennea, it was only fitting that the highlight of the Golden Gala came in the discipline that the legendary Italian sprinter was best known for.

There was much hype surrounding the 200m clash between US duo Noah Lyles and Michael Norman at the IAAF Diamond League meeting in Rome on Thursday (6). Lyles was the world leader over 100m, Norman led the world list at 400m. Both men have impressive records at 200m, a perfect ‘meet-in-the-middle’ distance for the pair.

Lyles had beaten Norman in their three previous encounters over 200m, once at the 2015 US U20 Championships, once at the 2016 US Olympic Trials and then again at last year’s IAAF Diamond League meeting in Lausanne.

But here in the Italian capital they were both entering the race in peak condition and at similar stages of their respective outdoor campaigns.

And it more than lived up to expectations.

Although Lyles has the much faster 100m PB, it was Norman who was ahead coming off the turn, and quite significantly so. Lyles is known for having a strong finish, but Norman has the strength of a man who can run well below 44 seconds for 400m.

Lyles did eventually start to close the gap but could never quite get on level terms. Norman timed his dip well to take the victory in a lifetime best of 19.70, moving him to 12th on the world all-time list.

Lyles was just a whisker behind with 19.72 – which, incidentally, was Mennea’s lifetime best. Both men were well inside the previous meeting record of 19.86.

“I changed a few things race-pattern-wise,” he added. “I was a lot stronger today and I tried to hold the composure.

“My coach told me to pull down a little bit because it is a long season. I am just happy now if I am progressing like this.”

Lyles was disappointed but was able to take away some positives.

“This race didn’t really go as expected,” said the two-time Diamond League 200m champion. “Winning is what is always expected, but I ran faster than in the last race so I can feel great things will happen.”

Alex Quinonez was a distant third in 20.17, while world champion Ramil Guliyev finished just ahead of Italian hope Filippo Tortu, 20.35 to 20.36.