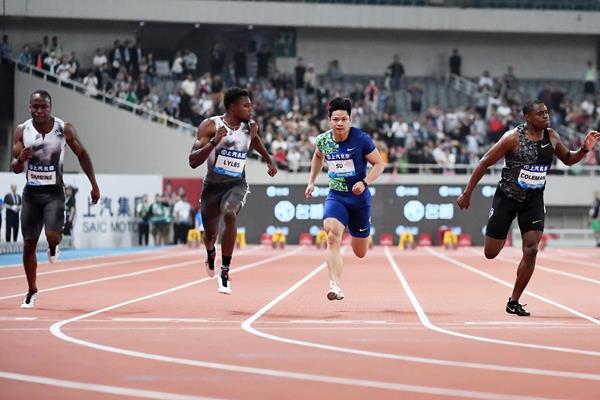 Noah Lyles produced a thrilling come-from-behind 100m victory over Christian Coleman in one of the key showdowns at the Shanghai Diamond League meeting on Saturday (18).

Astonishingly, Lyles wasn’t even in the race until nearly 70 metres in, at which point he produced a phenomenal change of speed, seemingly switching gears from third to sixth. At that point it was clear that Coleman and his narrow lead were in trouble. Lyles continued to accelerate, passing one runner after another before finally running down Coleman at the line, even as he looked towards him as he began his lean.

“This was a message to myself,” said Lyles, who chipped 0.02 from his previous personal best set last year. “The 100 has never been my dominant thing so I wanted to make sure this year that everybody knew I was a 100 and 200 runner, and not just a 200 runner kind of running the 100.”

He made that crystal clear. So, what will it take to improve the first 60 metres of his race?

“If I knew what it would take, I’d be doing it right now,” he said, laughing. “It’s going to take more repetition, more learning. This is my third year being pro and really my second just starting to run the 100 consistently, so I think the more races I have, and also just growing up – I’m 21 – and getting into those later years in my life and gaining more muscle. And really just fine-tuning those things, getting out of the blocks, that’s probably what it’s going to take.”

Further back, Akani Simbine was third in 9.95 and Reece Prescod fourth, in 9.97.