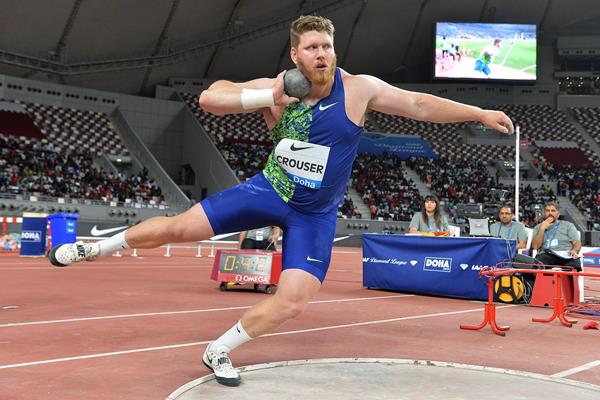 The men’s shot put is riding an unprecedented wave at the moment, with Ryan Crouser, the 2016 Olympic champion, sitting at its crest.

On 20 April, Crouser unleashed a 22.74m bomb in Long Beach, California, the farthest throw in the world since 1990. That effort elevated him to No6 on the all-time list during a time when those lists seem ripe for continual revision.

“The level in the men’s shot right now is unbelievable so anytime you can win the men’s shot is a great accomplishment,” Crouser said. So is treading in 22.70m-plus territory, where few have traveled before. In Long Beach, he did it twice, first throwing 22.73m before improving it by a cemtimetre a round later.

“I’d been throwing pretty well in training and I just wanted to go out there and get a good mark,” he said of his world leading effort. “I was a little bit surprised by the distance – I wanted to be over 22.20 and guessed I could throw 22.50. So it was a little better than I expected. It is early so it’s a good sign going forward.”

Shot putters usually know when they’re on. Crouser did, but then again, he didn’t.

IN DOHA, BEATING THE TRAVEL BLUES
Last night in Doha, Crouser prevailed at the first mammoth shot put showdown of the season, reaching 22.13 in the second round to defeat world champion and 2018 Diamond Trophy winner Tom Walsh, who threw 22.06m.

Given the circumstances, Crouser was pleased.

“It felt ok, and I’m happy with the win. I just personally felt a little flat. I really felt the 20 hours of travel to get here. I felt pretty decent warming up and during the first two rounds. But after that I just felt like it was time for bed.”

That said, his first trip to Doha was a valuable learning experience, well-timed just five months before he’ll be making a similar trip for the IAAF World Athletics Championships Doha 2019.

“This is the farthest I’ve ever been travel-wise,” the native of Portland, Oregon, continued. “I’m pretty good about going to Europe now, but this is another six hours. My body is reacting a little differently. So it was a learning experience and good going forward to come out here and get some confidence and good throws in the circle that’s going to the have the World Championships in October.”

While local organisers still have some fine tuning to do over those five months, Crouser has already given his seal of approval on Khalifa Stadium.

“It’s an awesome venue,” he said. “It is insanely loud out there on that field. And we were maybe at like a third capacity – maybe. So I cannot imagine what it’s going to be like at the World Championships because my ears are ringing now.”

That competition promises to be another proverbial barn-burner. Twenty-eight men have thrown 22 metres or better in the shot put. Seven of those were in Doha last night, and eight will be at the Prefontaine Classic in late June.

“It’s just a crazy level right now in the shot,” Crouser said. “For the longest time 21 metres was competitive. And around 2016 you started to see a couple 22 metre throws from Joe (Kovacs), and me and Tom (Walsh), and that’s kind of all three sides of the spectrum: Joe is strong, Tom is shorter and little bit lighter, and I’m on the taller side and lighter side. You have kind of a triangle and everyone on the spectrum is throwing far. And people began realizing you could throw 22 now with different body types and different techniques.

“We have eight guys entered in Prefontaine who have thrown 22 and very similar numbers here in Doha. And most of those guys have thrown 22 since 2016. So they’ve kind of just bought in that 22 metres is not an impossible throw and can find a way that fits their body type and their type of athleticism or personal strengths and make it work for them.”

With progress comes a downside.

“It’s been cool but also a little frustrating at times when you can throw 22 and get second and third and fourth even. So it’s been a little bit crazy. We used to have running joke that through 2016 that if anyone threw 22, no one else was allowed to throw farther than that.

“Now, If you’re a little bit off at 22, at some of the top meets you might not even get top three.”

By Bob Ramsak for the IAAF