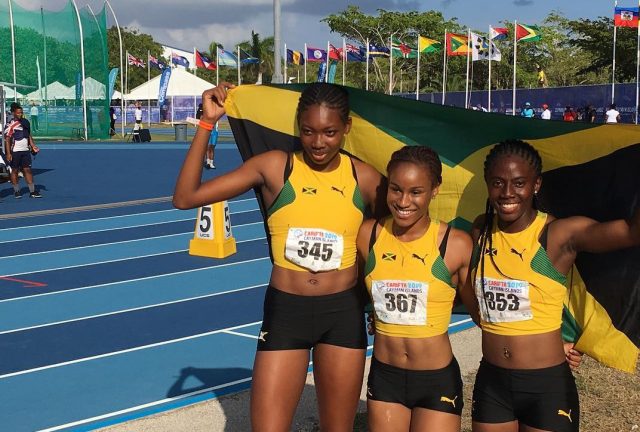 Jamaica extended its uninterrupted dominance of the Games to 35 years at the 48th edition of the CARIFTA Games held in the Cayman Islands from 20-22 April.

The island nation collected 36 gold, 33 silver and 16 bronze to finish ahead of The Bahamas who finished second with nine gold, seven silver and 10 bronze. Trinidad & Tobago came third after collecting four gold, eight silver and 12 bronze.

Due to the competitive nature of the sprints throughout the years, they were undoubtedly the marquee events prior to the start of the games, and a few lived up to those lofty projections.

AGAIN, WILLIAMS THE SPRINT STANDOUT
The precocious Briana Williams added more silverware to her growing reputation after producing another strong display of sprinting.

First, the double World U20 sprint champion took care of business in the U20 Girls 100m final on the opening day. Williams, drawn in lane three got an almost perfect start, which afforded her a two-metre cushion at the halfway stage, thereafter she shifted gears moving further away from the chase pack, winning in a season’s best 11.25.

“I’m very proud of what I did today, this win was very important,” Williams said. “The CARIFTA Games has been very good for my development over the years and I always look forward to coming back every time.”

Williams completed the sprint double in a season’s best and world U20 leading 22.89 to secure the Austin Sealy Award for most outstanding performer for the second year in a row.

Sealy, the CARIFTA Games founder, was among the capacity crowd on hand during the Games, which included IAAF President Sebastian Coe, NACAC President Victor Lopez and Vice President Stephanie Hightower.

Robertson’s teammate and world U20 leader, Oblique Seville, had looked the best sprinter throughout the qualifiers while the other Bahamian entrant, Rico Moultrie, was touted as a potential spoiler.

Seville, the newly minted Jamaica high school champion, was fast from the blocks and continued at full throttle to score an impressive victory in 10.24.

“This is my first CARIFTA Games and I’m happy that I came out here and executed my race properly even though I’m a little disappointed with the time,” Seville said.

Robertson, who only reached the final as the last non-automatic qualifier, came through with a storming run out of lane one in 10.37 to secure a 1-2 finish for Jamaica.

The absence of Jamaica’s top-tier U17 sprinters on the girls’ side, ensured the events in that age group remained as wide open as the Caribbean Sea. Bahamian Anthaya Charlton ran a lifetime best 11.51 to take the win while Trinidad & Tobago’s Devin Augustine took the boys equivalent in a lifetime best 10.62.

Xavier Nairne ensured that Jamaica would capture all the U20 sprint titles with a high-octane performance in the 200m. Nairne flew around the top bend with plenty of determination, his nippy strides in harmony with adrenaline. In the dash for home, he powered away from the field bursting the tape in a new personal best 20.65. Nairne’s teammate Antonio Watson clinched second in a lifetime best (20.83) just ahead of U20 one-lap champion Terrance Jones (20.89).

“I knew I was in brilliant form,” Nairne beamed. “As you know speed kills, so my strategy was to come off the curve before the 400m champion and give it my all.”

Bahamas won the two age-group boys’ 400m titles, twice denying Jamaica in nail-biting encounters. First, Wendell Miller timed his run to perfection with a late surge, which propelled him from fourth to gold in the U17 final in 48.45, 0.09 ahead of Jamaica’s Tahj Hamm. Terrance Jones simply refused to lose in the senior boys’ event and withstood a strong challenge from Jamaica’s Anthony Cox in a stirring home straight duel. Jones won in a lifetime best 46.29 ahead of Cox 46.36 and Evaldo Whitehorne 46.39.

Caitlyn Bobb of Bermuda won the U17 girls 400m in a personal best 53.69. “I’m very happy to run a PB in these hot conditions as I’m from Maryland where I’m more accustomed to running in 50-degree (10C) weather.”

The sprint hurdles, which so often create spills and surprises, produced no such drama as proceedings went according to script. Jamaica ruled supreme winning every event with the U20 boys’ 110m hurdles being the highlight. Rasheed Broadbell produced a blistering run to take the event in 13.26 just 0.03 outside the record.

CHANG DOMINATES DISCUS
On the infield, world U20 discus champion Kai Chang killed the competition stone dead after launching the disc out to 56.73m on his third attempt. Although improving to 59.36m with his last effort, Chang was not a happy man.

“The conditions were really difficult for me, the sun was hotter than I expected and everyone got one minute to throw which affected our rhythm,” Chang said. “I was also hoping for my event to have been scheduled in the afternoon session as is customary at international championships where there is a crowd.”

ANOTHER BAHAMIAN MILLER SHINES
In the boys U20 high jump, Shaun Miller, the younger brother of Olympic champion Shaunae Miller-Uibo, won a thrilling contest. No fewer than five athletes were in contention for gold when the bar was elevated to 2.14m. That height immediately reduced the showdown to three contestants – two Jamaicans against the Bahamian.

Miller, who held the lead after stitching together a decent series, suddenly found himself trailing after Horatio Humphrey sailed over on his first attempt. Miller and Beckford both missed on their first try but cleared on their second prompting a reset at 2.16m. Miller then registered a lifetime best when he floated over on his second attempt, immediately shifting the pressure back towards Beckford and Humphrey who tried unsuccessfully to negotiate unchartered territory before bowing out graciously with 2.14 PBs.

“It was a really tough competition, but I just remained focused and knew that my hard training was going to pay off,” said Miller.

Jamaica’s Wayne Pinnock, the world U20 long jump leader at 8.05m, duly wrapped up that competition without fuss for the second straight year. Pinnock wasted no time in stamping his authority on proceedings after soaring out to 7.55m on his first attempt. In the fifth round, Pinnock uncorked his best jump cutting the sand at 7.84m (2.0 m/s), just 10 centimetres shy of Kareem Streete-Thompson’s record set 29 years ago.

”It is a fantastic feeling going undefeated. Each competition I come out and give the best for my country,” said Horsford.

Jamaica brought out a big broom for the relays sweeping all categories in impressive fashion. Jamaica survived a late flourish from Bahamian anchor leg runner Joel Johnson in the boys’ U20 4x100m to win by a whisker 39.46 to 39.49. The curtains came down with a commanding display in the boys’ U20 4X400m from the Jamaicans who stopped the clock at 3:07.82.