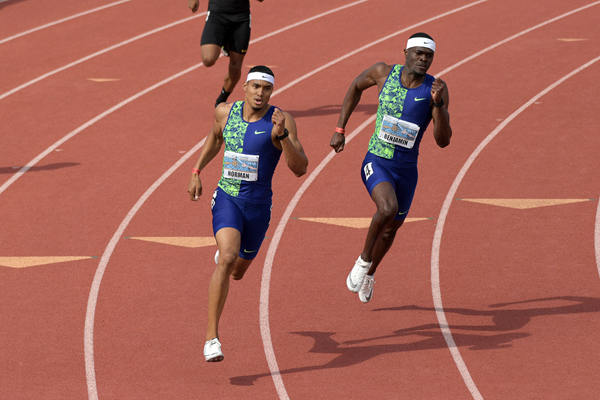 US 400m runner Michael Norman and Olympic shot put champion Ryan Crouser started their 2019 outdoor campaigns on Saturday (20) with the best ever season debuts in history in their respective events.

Norman sped to a 43.45 victory at the Mt SAC Relays in Torrance, California, to come within 0.42 of Wayde van Niekerk’s world record and 0.27 adrift of Michael Johnson’s North American record.

Drawn one lane outside training partner and hurdles specialist Rai Benjamin, Norman started strongly but had just a slight lead over Benjamin as the pair entered the home straight, comfortably ahead of the rest of the field.

Norman, whose previous best was 43.61, now moves from sixth to equal fourth on the world all-time list, tied with 2004 Olympic and two-time world champion Jeremy Wariner.

Many other international stars were in action across the three days of competition at the Mt SAC Relays, one of the USA’s most prestigious early season meetings.

Vashti Cunningham, the 2016 world indoor champion, won the women’s high jump with 1.97m. Canada’s Django Lovett won the men’s event with 2.30m. Olympic champion Derek Drouin, who returned to action last week after spending the past 18 months on the side lines with a disc injury, finished eighth with 2.14m.

Sydney McLaughlin ran a 50.1 opening leg on the victorious ‘Hayes All-Stars’ team in the women’s 4x400m. Anchored by Kendall Ellis, the quartet finished in 3:29.88.

On the first day of the meeting, Brooke Andersen became the fourth US woman to throw beyond 75 metres in the hammer, winning her event with 75.05m.

Crouser, who threw 22.33m two months ago to move to fourth on the world indoor all-time list, opened his series with 21.53m. He matched that mark in round three and then unleashed a lifetime best of 22.73m in round four.

He wasn’t quite done, though, and improved to 22.74m in the following round before ending his series with a foul.

“The energy was awesome,” Crouser said on his Instagram page. “The college guys competed really well and made the competition a great one. The future is bright for USA shot put.”

The 22-year-old Nigerian, who runs for Texas Tech University, started his afternoon with a 9.94 (0.8m/s) lifetime best in the 100m, smashing his PB by 0.16 to move to equal sixth on the African all-time list. Teammate Andrew Hudson was second in 10.13.

Just 45 minutes later Oduduru was back on track for the 200m and produced an even more dominant run. He won in 19.76 (0.8m/s), once again beating Hudson (20.47) and breaking his previous best of 20.13 set on the same track last year. Oduduru moves to third on the African 200m all-time list and is just 0.08 shy of the continental record set in 1996 by Frank Fredericks.