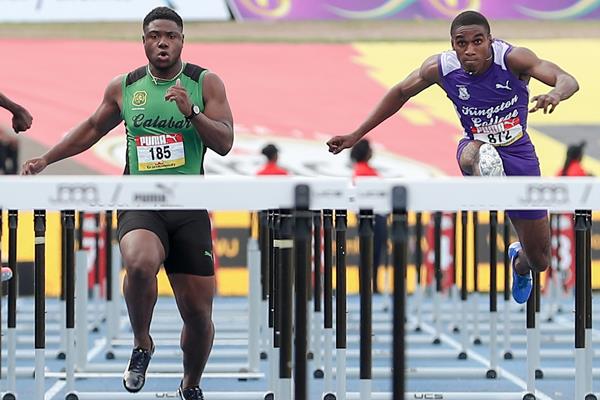 Pinnock, a world U20 bronze medallist in the long jump, kept statisticians busy throughout collecting three gold medals with two championships records. The 18-year-old first soared out to 7.95m (-0.8 m/s) to erase the boys’ 16-19 long jump record of 7.87m, which was established in 1993 by Leon Gordon. A few minutes later on his third attempt, he etched his name permanently in the Champs annals becoming the first high school athlete in meet history to jump eight metres cutting the sand at 8.05m, a U20 world-leading mark.

On the championships’ final day, Pinnock stunned the 30,000 capacity crowd when he stormed to a world leading 13.06 in the 110m hurdles, ensuring for the third consecutive year the event record was revised. Incidentally, trailing way behind Pinnock was two-time defending champion De’Jour Russell of Calabar who finished 4th in 13.43.

“It has really been a battling season for me,” said Russell, who was competing over the barriers for the first time this year. “As a true competitor and a true champion, I just came out here to represent my school although I wasn’t 100% fit.”

World U20 100m finalist Michael Stephens came into boys’ 16-19 sprint final with clearly the biggest credentials and it was his event to lose – and he did. His teammate Oblique Seville captured gold in a scintillating personal best of 10.13 coming within a whisker of equalling Zharnel Hughes’ record of 10.12 set in 2014. Ryiem Robertson of Jamaica College, just like last year, had to settle for silver in a personal best 10.19 while Stephens, in his final Champs outing, could finish no higher than fifth in 10.35.

Erstwhile heptathlete Ashanti Moore of Hydel High blew away the competition in the girls’ 17-18 class one 100m final. Moore won by daylight in a personal best and U20 world leading 11.17 a mere 0.04 outside the championships record set by Veronica Campbell-Brown 18 years ago. There was certainly more to come from the powerfully built athlete who duly completed a fine sprint double winning the 200m in 23.26.

World U18 bronze medallist Kevona Davis defended her girls 15-16 100m title with a thumping win in 11.19. Vashaun Vacciana of St. Jago High scored a huge upset in the boys 14-15 100m final. Vacciana ran a lifetime best 10.38 leaving the Kingston College pair of Nkrumi Bouwahjgie 10.54 (PB) and red-hot favourite Terrique Stennett (10.57) trailing in his wake. “I’m feeling elated right now,” said Vacciana. “Many of my friends doubted me saying I would not beat Stennett but I didn’t really listen to them. I did it.”

The following day Vacciana lowered his own record (13.35) in the 110m hurdles to 13.26. World U18 bronze medallist Daszay Freeman produced a late surge over the last two hurdles to come out on the right side of a blanket finish in the girls 17-18 100m hurdles final in 13.63. St. Elizabeth Technical’s Winsome Harris (13.66) and Hydel High’s Joda Campbell (13.67) completed the podium.

It was a sister act affair in the girls 13-14 100m final with Tina Clayton upstaging her twin sister Tia in stunning fashion. Since 2017, spectators have grown accustomed to seeing the twins compete in separate sprint events. Tia was the overwhelming favourite after her world age-14 best (11.37) on 26 February. Tia drawn in lane five got the best start and led up to 40 metres before Tina, in lane three, came charging through with an unrelenting burst of speed chopping one tenth of a second off Tia’s mark swapping places with her as the fastest 14 year-old ever.

In the boys 10-13 100m dash, Christopher Scott of Jamaica College reigned supreme. Scott sizzled to 10.69 in the heats, shaving one tenth of a second off the record. He then registered 10.88 in the semi-finals before outclassing the field in the final bursting the tape at 10.73. No other athlete breached 11 seconds in this age group.

800M WINNER FARQUHARSON IMPRESSES
The sprints were not the only track events that generated interest among the spectators as a few of the middle distance events promised fireworks. The late Sherwin Burgess set the boys’ 16-19 800m record (1:48.84) in 1987, a year before Hurricane Gilbert arrived in Jamaica and it took a storming home straight run by Calabar’s Kimar Farquharson to remove it. Farquharson edged co-favourite Tyrice Taylor of Enid Bennett High 1:48.67 to 1:48.91.

“I was very watchful all the way and didn’t make my move until the home straight,” said Farquharson.

Charokee Young of Hydel High completed a rare 400m/800m double on the same day. Her most satisfying win came in the 800m where she defended her title with aplomb turning back the spirited challenge of Petersfield’s Shaquena Foote in a personal best 2:06.02.

The most exciting race of the championships though came in the boys 10-13 800m final where Kingston College’s Jaquan Coke overcame a 65-metre deficit on the final lap overtaking favourite Tavaughn Martin of Bellefield in a lifetime best of 1:58.50. “At no point in the race I felt I couldn’t pull it off, although I’m not sure why I allowed him to get so far ahead,” Coke said with a cheerful smile.

Elsewhere, Lamara Distin of Hydel supplanted Chanice Porter as the new record holder in the girls’ 17-18 high jump when she cleared 1.87m. World U20 champion Kai Chang, despite producing only two legal throws, won the boys’ 16-19 discus with 61.93m effort.

Christopher Taylor, the 2015 world U18 champion and World U20 runner up, was poised to complete his Champs journey on a memorable note. However, he looked listless throughout the preliminaries raising concerns about his fitness. His second place finish in the boys 16-19 400m final in a pedestrian 46.38, by his standards, and subsequent withdrawal from the 200m final was not the farewell memory envisioned for someone of his high calibre.