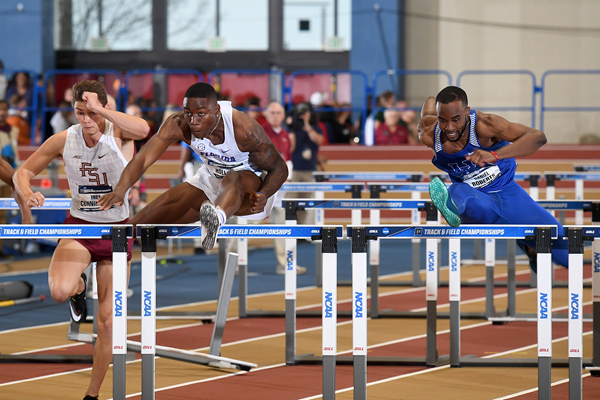 Grant Holloway (world 110m hurdles rank: 19) broke a 32-year-old North American indoor record in the 60m hurdles at the NCAA Indoor Championships in Birmingham, Alabama, on Saturday night (9), moving to third on the world indoor all-time list. That should have been enough, but he also won the 60m, finished third in Friday’s long jump final with 7.95m, and ran a 46.00 leg in the 4x400m.

No wonder his University of Florida team won the men’s title in the NCAA Indoor Championships at Birmingham, Alabama, where attendance figures for the second day of the championships exceeded 5,500.

“I put my mind to something, I went out there and accomplished it,” Holloway said. “No matter how many times I fell, no matter how many people told me I can’t do it, you can do anything as long as you’ve got God behind your back and a great support system.”

Holloway’s time of 7.35 in the hurdles broke the North American record of 7.36 set by Greg Foster in Los Angeles in 1987. That mark was tied by Allen Johnson in Budapest in 2004 and by Terrence Trammell in Doha in 2010.

Britain’s Colin Jackson set the world record of 7.30 in 1994 in Sindelfingen, Germany. The only other hurdler faster than Holloway is Cuba’s Dayron Robles, who clocked 7.33 in Dusseldorf in 2008 and 7.34 in Doha in beating Trammell at the 2010 IAAF World Indoor Championships.

“I’ve been chasing it, running after that time, for so long,” Holloway said. “Now that my name is finally under it, it’s perfect. I’m shell-shocked.”

Holloway’s time was a collegiate and championship record and, of course, fastest in the world this year.

Florida coach Mike Holloway (no relation) credited Daniel Roberts (world 110m hurdles rank: 44) for pushing his hurdler. Roberts finished second in 7.41, which was under Holloway’s former collegiate record of 7.42 and moved him to equal 15th on the world indoor all-time list.

RICHARD WINS HIGH-QUALITY 400M
Elsewhere, Tyrell Richard (world 400m rank: 34) climbed to No.5 on the world indoor all-time list by winning the 400m in 44.82. Oddly, he enrolled at South Carolina State University to play American football but learned he is better on the track.

Kahmari Montgomery (world 400m rank: 25), who had been the world leader, lowered his time by .01 to 45.03 and finished second. Wil London (world 400m rank: 30), silver medallist at the 2016 World U20 Championships, was third in 45.16 and Quincy Hall rounded out the faster string of the final in 45.25. The times set by Montgomery, London and Hall are the fastest ever marks for second, third and fourth in an indoor 400m race.

Florida’s team championship was its fifth in 11 years. The Gators have finished second four times in that span.

Alexis Jacobus (world pole vault rank: 20) led a 1-3-4 finish by the University of Arkansas with a pole vault of 4.61m. Arkansas won the women’s team championship.