For the first time since 2010, Team Americas has triumphed at the IAAF Continental Cup, held in Ostrava, Czech Republic over the last two days. 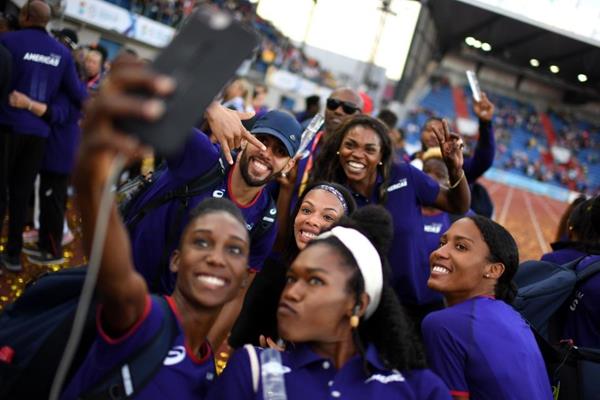 The competition was exhilarating and fierce between the four continental teams and particularly between the two front-runners, defending champion Team Europe and eventual winner, Team Americas.

The Americas led by just 12 points after the first day, but pulled away on day two, led by particularly strong performances from their two athlete representatives Olympic triple jump champions Caterine Ibarguen of Colombia and Christian Taylor of the United States.

They joined non-competing captain Mike Powell, the world long jump record-holder, to accept a spectacular trophy, composed of 116 Bohemia crystal relay batons. Each member of the winning team received one of the hand-crafted batons as a memento.

“I’m really proud of all the athletes,” Powell said. “When I looked at the entries, we had a stacked team. Winning the first track race, the 100m hurdles, created a lot of momentum for the team, and for me. At first I was kind of watching it, but then I was counting every point.”

Victory in the final event, the mixed 4x400m relay, sealed the win for the Americas as they tallied 262 points to Europe’s 233. The Asia-Pacific team had their best outing at this competition, finishing third (188) ahead of Africa (142).

Athletes from all teams had their moments over the two days but Taylor and Ibarguen inspired with two victories each. Ibarguen completed the triple jump-long jump double on Sunday with a personal best and Colombian national record of 6.93m, and Taylor soared to 17.59m as he dominated the men’s triple jump and then backed up to lead off the winning 4x400m relay.

Olympic 400m champion Shaunae Miller-Uibo of the Bahamas provided the third double for the Americas on Sunday, backing up from a brilliant win in the 200m to join Taylor in the 4x400m relay.

This year’s Continental Cup trialled some new competition formats in the distance events, horizontal jumps and throws, which sparked much debate among athletes, coaches and fans as the IAAF strives to create new ways for people to engage with the sport.

Taylor said he had enjoyed the challenge of competing in the elimination format used for the jumps and throws, and he encouraged the IAAF President Sebastian Coe to continue his quest for innovation.

“All the rule changes have been a lot of fun for the viewers,’’ he said. “As athletes we had to adjust a little bit. For the jumps I think there could be some cleaning up. On the last jump it would have been nice to have a minute’s recovery outright to jump further but, you know, it’s trial and error. It’s not going to always go well the first time but… stay patient. I applaud Seb for trying, and I’m excited that we’re trying to be innovative and try new things.”

Coe said it was “an ideal opportunity to road-test some innovative ideas’’.

“Some were very exciting, like the mixed relay and the men’s elimination 3000m. The spectator area which was introduced at the warm up track was always full and that’s all part of getting the spectators closer to the athletes.

“Some of the formats are more of a challenge and we need to reflect but let’s not lose our nerve here. We have to innovate and if we don’t innovate, we die. We will now consider what we have seen here, and consult with the athletics community, including athletics and fans. We have plenty to discuss.’’

For full reports on the IAAF Continental Cup competition, go to our dedicated mini-site on www.iaaf.org.