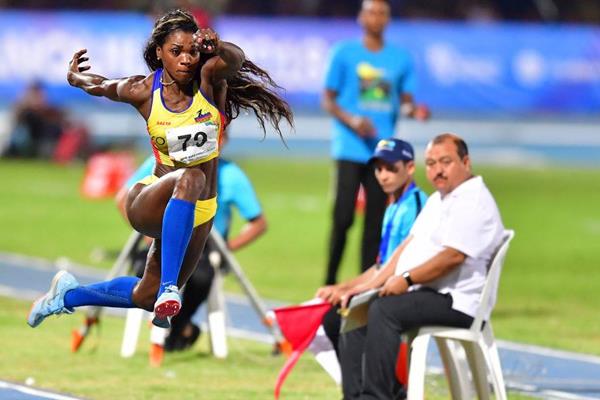 A packed Rafael Cotes stadium was pleased with every jump by the defending champion, who broke her own competition record twice, including 14.92m in the fifth round, the second longest in the world this year and her ninth best ever.

Ibarguen opened with 14.66m, which was not considered a new record due to to the +2.2 m/s tail wind. She improved to 14.74m in the following round under a strong tail wind, before topping her previous mark with a wind-legal 14.79m. She followed with a windy 14.76m and landed at a wind-legal 14.92m to rewrite the record books twice in the evening.

“Thank you Barranquilla. I am very proud of being Colombian and to contribute to my country in the Games,” Ibarguen told an elated crowd after a victory lap. Her countrywoman Yosiris Urrutia (14.48m) and Cuba’s Liadagmis Povea (14.44m) joined her on the podium, both with wind-assisted performances.

Adding her long jump victory on Monday, the 34-year-old becomes the second woman in the history of the Games to take the long jump/triple jump double, the same feat achieved by Cuban-Spanish Niurka Montalvo in 1993. With eight medals in five editions, including the two gold in Barranquilla, Ibarguen becomes the most decorated Colombian athlete in the history of the Games.

Colombian athletics fans sang their national anthem four times during the day as the team rose to the top of the medal tally with eight gold medals.

BALOYES TAKES 200M TITLE
When things settled following Ibarguen’s win, 20 minutes after the expected start, Bernardo Baloyes became the first Colombian athlete to take gold in the 200m in the history of the Games. After running two national and Games records on Tuesday, Baloyes ran 20.13 to prevail over Panama´s Alonso Edward (20.17) and Trinidad and Tobago´s Kyle Greaux (20.17). On Tuesday, the silver and bronze medallists had become the first two men to break the 20-second barrier in the history of the Games.

“This is special to compete at home with my mom and girlfriend watching. There is a special motivation to be here. To have my mom, my girlfriend and friends supporting is amazing,” said Arevalo, who improved from silver in 2014.

In the first final of the evening at the stadium, Maria Lucelly Murillo added another gold to the host country with her victory in the Javelin in 59,64m in the final round. Murillo improved from her bronze medal at the 2010 edition of the Games.

DOUBLE WIN FOR CUBAN ALMANZA AND GAMES RECORD FOR RODRIGUEZ IN HEPTATHLON
Two days after dominating the 800m, Rosemary Almanza became the first athlete to win two gold medals at the Games as she moved away from the field on the home stretch to take the 1500m. She became the first Cuban woman to clinch the title in the distance and followed previous 800m/1500m double winners Letitia Vriesde (1993) of Surinam and Colombia´s Rosibel García (2010). Garcia finished third on Wednesday while Colombia’s 5000m gold medallist and 1500m defending champion Muriel Cuneo faded to fifth after leading during 1200m.

World indoor bronze medallist and second on the world lists, Yorgelis Rodriguez successfully defended her heptathlon crown with a Games record of 6436 points. South American record holder Evelis Aguilar came within 26 points of the Cuban after the long jump and went on to win silver in 6285 points, a new Area record. Venezuela´s Luisaris Toledo finished fast in 800m (2:12.27) to win bronze in a new national record of 5848.

Jamaica added two more victories on the track with Shashalee Forbes in 200m (22.80) and Tiffany James in 400m (52.35) to enjoy their best performance ever in the history of the Games. Seven of the country´s 10 gold medals won at the Games have been achieved in athletics.

Mexico also continued a solid performance. Jose Leyver Ojeda took the 50km race walk win in very hot and humid conditions, with his wife and two daughters supporting him during the 50-lap loop course along the Malecon in Barranquilla. Recovering from the 5000m final a day earlier, Fernando Daniel Martinez bided his time and led a gold-silver finish in a slow final, followed by Jose Eduardo Rodriguez.

Trinidad and Tobago’s two-time Olympic finalist Cleopatra Borel became the first woman to win three gold medals in the shot put with a 18.14m effort in the shot put. 2007 world champion Donald Thomas added to his 2010 gold with a victory in the high jump. Dominican Republic´s 2012 Olympic silver medallist Luguelin Santos ran a season´s best of 44.59 to secure the gold in 400m, a day after his younger brother Juander had won bronze in the 400m Hurdles.

For Trinidad and Tobago, Bahamas and the Dominican Republic, it was their first athletics title of the Games.

Ten finals will be contested on Thursday on the last day of track and field action at the Rafael Cotes stadium, before the marathon is held on the closing day of the Games on Friday. Some of the top names expected to shine on Thursday are Trinidad and Tobago’s 2012 Olympic champion Keshorn Walcott in Javelin, 2018 World U20 Yordan Diaz of Cuba in the Triple Jump and Saint Lucia´s Levern Spencer, who will aim for a third consecutive title in the High Jump.