O’Dayne Richards set a Games record in the shot put while his Jamaican teammates achieved a historic double in the 100m, but it was Colombia’s Catherine Ibarguen who sent the home crowd into a frenzy on the second day of athletics at the Central American and Caribbean Games in Barranquilla on Monday (30). 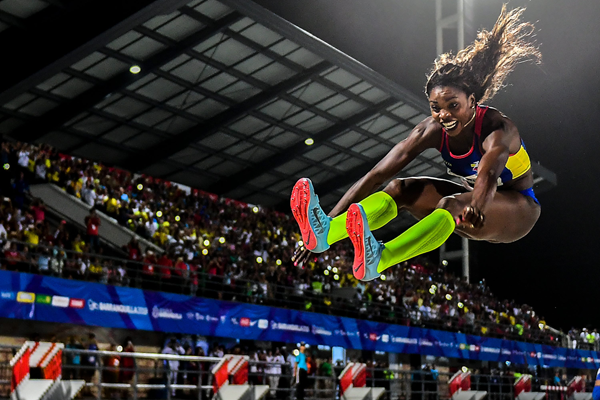 Ibarguen, the local crowd’s national sporting heroine, completed the first half of a horizontal jumps double by winning the long jump, her secondary event. The two-time world and 2016 Olympic triple jump champion twice jumped farther than the Games record (6.67m) but her 6.74m and 6.83m leaps in the fourth and sixth rounds benefited from tail winds in excess of 2.0m/s and so won’t be included in the record books.

Following her last jump, she was greeted by the Games mascot Baqui and was joined by her training partner, close friend and bronze medallist Alysbeth Felix of Puerto Rico on a lap of honour. Defending champion Chantel Malone of the British Virgin Islands was second in a season’s best of 6.52m.

“Good evening Barranquilla, thank you for your support and energy,” Ibarguen told the crowd. “This win shows Colombia can achieve great things if we work hard.”

A winner of seven medals in five Games, the 34-year old will try to become the second athlete in Games history to win the long and triple jump double. The final in her specialty event will be contested on Wednesday.

RICHARDS BACK BEYOND 21 METRES
On a day with 12 current and former world and Olympic medallists on show, the first final did not disappoint. Richards took the shot put gold in a competition that saw four men throw beyond the previous Games record that had stood for 16 years.

Eldred Henry of the British Virgin Islands sent his shot out to 19.91m in the opening round to improve on Yoger Medina’s 19.63 Games record from 2002. Ashinia Miller of Jamaica extended it to 20.19m in the second round but just minutes later his teammate Richards produced a season’s best of 21.02m to take a lead he would not relinquish.

The 2015 world bronze medallist went on to produce throws of 20.75m and 20.41m, farther than any other finalist managed. Henry set a national record of 20.07m in round four and 20.18m in round five, missing out on the silver medal by just one centimetre.

“The crowd was amazing and my rivals pushed me from the very start,” said Richards, who took silver at the 2010 edition of these Games. “I am happy to win Jamaica’s first gold and there is more to come from us here at the Games.”

The sprinters followed for the delight of the fans and the Jamaican team in the stands. Jonielle Smith took the women’s title in 11.04, faster than the Games record of 11.18 set 20 years ago by Chandra Sturrup of The Bahamas, but not recognised as an official record due to the 2.3m/s tail wind.

“This is special,” said the 22-year old, who became only the third athlete from her country to take the women’s 100m title and the first one in 68 years. “The track is fast and the girls pushed me to run fast. I am so excited to win gold for Jamaica.”

Another historic performance ensued in the men’s 100m. After a 15-minute wait following the false start by Barbados’ Burkheart Ellis, 2012 Olympic 4x100m gold medallist Nesta Carter became the first Jamaican man to win the 100m crown in the 94-year history of the Games.

He clocked 10.07 for the win, his fastest time in three years. In the semifinals, he had run a wind-assisted 9.92 (2.1m/s), the fastest 100m ever recorded under any conditions on Colombian soil, much like Smith’s wind-assisted 11.04 from the women’s final.

After picking up just one athletics medal – a bronze – at the 2014 edition of these Games, Jamaica earned three titles on a single day and looks to produce their most solid performance at the Games in recent history.

DOUBLE GOLD FOR CUBA
Cuba also enjoyed a good day, picking up gold medals in the women’s 800m thanks to defending champion Rosemary Almanza (2:01.62) and in the men’s decathlon as two-time world and Olympic medallist Leonel Suarez scored 8026 on his CAC Games debut, completing his first decathlon in almost a year.

Trailing Colombia’s Jose Gregorio Lemos by 33 points after the javelin, Suarez needed to beat him by six seconds in the 1500m. He took the lead shortly after the first lap and went on to win in 4:34.21, 25 seconds faster than Lemos, who was rewarded with silver and a national record of 7913. Day one leader Briander Rivero scored a personal best of 7858 to secure bronze for Cuba.

“It was a tough battle and before the Games I doubted if I should come as I have been battling injuries,” said Suarez. “This win gives me a lot of confidence in this Olympic cycle to be a major contender again in Tokyo 2020. Congratulations to Juan. He is a great thrower and pushed us until the very end.”

World University Games champion Jesus Tonatiu Lopez won the men’s 800m in 1:45.2 to become the fourth Mexican man to take gold in the two-lap race and the first one in 28 years.

Nine finals will be contested on the third day on Tuesday, including the sprint hurdles, 5000m and 400m hurdles for both men and women. In the 400m hurdles, Kyron McMaster, the third fastest in the world this year, wants to become the fourth athlete and the second man from the British Virgin Islands to win gold at the CAC Games.