Noah Lyles is doing things at age 20 that… well, things not even Usain Bolt did. There might never be a sprinter to match Bolt, but Lyles is trying to emulate him in performance and showmanship. 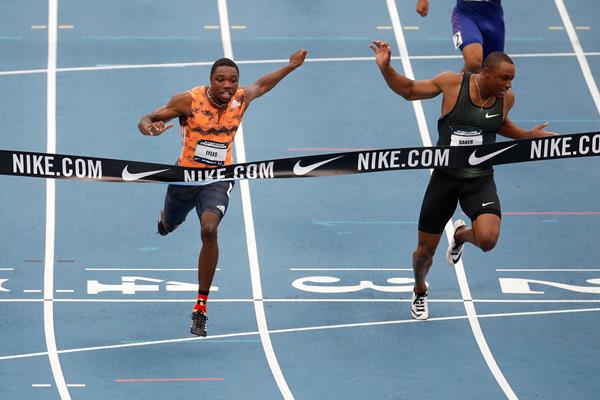 Lyles caught Ronnie Baker in the final strides Friday (22) to win the 100m in 9.88, the fastest in the world this year, on day two of the US Championships in Des Moines, Iowa.

Lyles, the 100m gold medalist at the IAAF World U20 World Championships Bydgoszcz 2016, is the youngest US athlete to be both sub-10 and sub-20. He became the youngest US champion in the 100m since Sam Graddy in 1984. Lyles acknowledged he did not think his first US title would be in the 100m.

Afterwards, he bowed to the crowd and did a “Shoot” dance introduced by rapper BlocBoy JB and popularised in Fortnite, a video game. Lyles wore “Incredibles” socks from the animated Disney movies.

He said he plans dance moves and themes before meets “in case I win”.

He won his semifinal in 9.89, equaling the world lead of Mike Rodgers from Thursday’s heats. Rodgers scratched from semifinals, joining a long list of stars missing from these championships.

Yet the 100m champion was nearly neither Rodgers nor Lyles, considering Baker’s lead. The 60m bronze medalist from the World Indoor Championships in March was finally overtaken and finished second in a PB of 9.90.

Kendal Williams was third and Isiah Young fourth, both in 10.00. Cameron Burrell, whose father Leroy once held the world record, was fifth in 10.04.

Lyles said he has been coming from behind since age 13, especially in the 100m.

“It made the race that much more interesting,” he said. “For a second there, I didn’t know if I got it. I felt like in my heart I got it. But you never have it until the screen says you do.”

The only other sprinters to run sub-9.90 twice in the same day have been Jamaicans Bolt, Yohan Blake, Asafa Powell and Justin Gatlin and Trayvon Bromell of the US.

HOBBS TAKES WOMEN’S 100M TITLE
Aleia Hobbs also achieved a historic victory, becoming the first collegian to win the women’s 100m since Carlette Guidry of the University of Texas in 1991. Hobbs, the NCAA champion from Louisiana State, won the final in 10.91. She was sub-11 in all three rounds, clocking 10.97, 10.89w and 10.91.

Hobbs said it was disappointing that world champion Tori Bowie was absent.

“Just ‘cause that’s Tori Bowie. I would love to race her,” Hobbs said. “I know it’s coming soon. I’m looking forward to it.”

In the men’s triple jump, two-time Olympic champion Christian Taylor had to head to the runway soon after he ran a 45.95 semifinal of the 400m. He passed his first attempt, fouled, and then passed again.

Zach Ziemek won the decathlon – part of the IAAF Combined Events Challenge – with 8294, nipping the stadium record of 8291 set by Ashton Eaton at the 2013 US Championships. Ziemek is the first US decathlon champion other than Eaton or Trey Hardee since 2010. Ziemek was first or second in six events, posting his highest scores in the 100m (10.64) and pole vault (5.35m).

In the heats on Friday, world record-holder Keni Harrison was fastest in the 100m hurdles at 12.46.

In the finals on Thursday, Keturah Orji did not reclaim her US record but set a championships record of 14.59m in winning the triple jump for a third successive year. World leader Tori Franklin, who set a US record of 14.84m last month, first broke the 14-year-old meeting record (14.45m by Tiombe Hurd) with a distance of 14.52m in the second round. Franklin held that record for about five minutes, or until Orji came through with 14.59m in the third round.

Elsewhere in field events, Valarie Allman won the discus at 63.55m and Kara Winger the javelin at 62.88m. It was the eighth US championship in the javelin for Winger, second in history behind Dorothy Dodson, who won 11 in succession (1939-49).

The biggest surprise of Thursday’s heats was failure of defending champion and US leader Robby Andrews (3:36.05) to qualify for the final of the 1500m. He was sixth in one of three semifinals in 3:43.89 and did not advance on time. Olympic champion Matt Centrowitz won his semifinal in 3:46.05 off a 54.85 last lap.