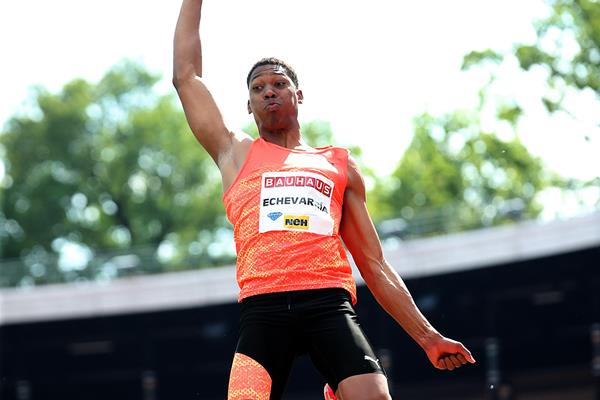 At the BAUHAUS-galan meeting in Stockholm on Sunday (10), the sixth stop of the 2018 IAAF Diamond League, the teenager sent a shockwave through the sport in the final round of the men’s long jump, soaring out to an astonishing 8.83m, a jump that is unfortunately ineligible for record purposes due to a marginally illegal tailwind of 2.1m/s.

But when he hit the sand and the mark flashed up on the screen, few cared about such minor details as gasps rippled through the crowd in the Olympic Stadium.

The event had been billed as a duel between Echevarria and world champion Luvo Manyonga, and most in the crowd would have picked the latter after he’d leapt 8.58m to beat Echevarria in Rome 10 days ago.

But in truth, Manyonga never showed up here in Stockholm, at least not as the jumper we know, the South African’s only valid jump coming in the second round with 8.25m. Instead it was USA’s Jeff Henderson who mounted the strongest challenge, finishing second with his leap of 8.39m (+3.4m/s).

Echevarria seized command with his 8.50m (+0.2m/s) in the fourth round, then fouled his fifth before shaking up Stockholm in the final round with 8.83m, the longest jump in the world for 23 years.

“Today I wanted over 8.50m but I didn’t think I could jump so far,” he said. “The pressure on me was good today and it was good competing against the top guys. I want to jump at this level for a long time, but it’s early season so I will take it all step by step.”