On the comeback from year-long absences, former Olympic champions Shelly-Ann Fraser-Pryce and Kirani James scored impressive victories in the women’s 100m and men’s 400m respectively at the 3rd edition of the JN Racers Grand Prix meeting, dubbed STARS The Next Generation, on Saturday (9) in Kingston. 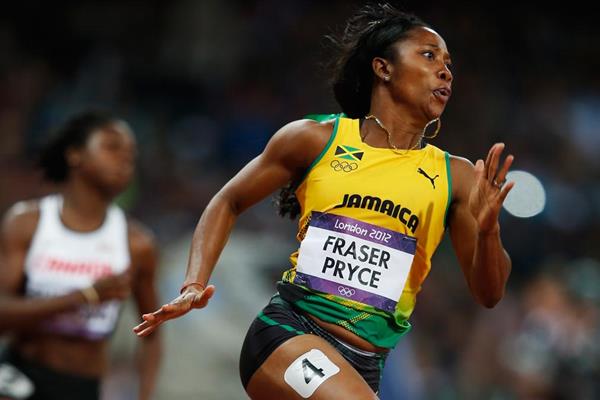 The most notable performance came in a close 100m race where Zharnel Hughes took the victory in 9.91 (0.4 m/s), the fastest time in the world this year.

Hughes was already the fastest Briton this season, but nevertheless ran like someone with a point to prove and his victory with a new personal best delighted the appreciative crowd.

“It was a great race,” said Hughes, whose previous best was 10.01 set in February, also in Kingston. “Unfortunately, my blocks slipped when I pushed off so it hampered my start a little bit, but I am in great form so I regained my composure and just relaxed while maintaining my phases and I came through successfully.”

“I’m pretty pleased with my PB,” said Lyles. “I’ve been trying to run 9 seconds for about two years now and the wind hasn’t been right and finally it came tonight.”

POCKET ROCKET RETURNS
Fraser-Pryce, also a four-time world champion, motivated by a boisterous home crowd that turned out to see her first international race on home soil since becoming a mom last August, powered away from the field to win in season’s best 11.10. Following a few steps behind in second was Jenna Prandini of the US in 11.14, while rising 16-year old sensation Briana Williams grabbed third in 11.26.

“It was really emotional but I received a warm reception which calmed my nerves and I’m really grateful for the outcome,” said Fraser-Pryce, who avenged her loss to Prandini a week ago at the Cayman Invitational.

JAMES OUT-DIPS KERLEY
Competing in his first race since April 2017, James had to dig really deep to reel in Fred Kerley who led for 399 metres. Kerley, as is customary, ran aggressively powering through the back straight and looking in complete control when the home straight came into view. However, just when it seemed his gambit would pay off, the long striding James began to make serious inroads into the lead with an incredible charge up the home straight forcing Kerley to lose momentum when the pressure came. James eventually got home with a well-timed dip in 44.35, a meeting record. Kerley was 0.01 behind while James’s compatriot Bralon Taplin was third in 45.11.

“I’m really satisfied with my performance tonight but I still have a long way to go,” said James.

ANOTHER 200M WIN FOR MILLER-UIBO
Shaunae Miller-Uibo continued her impressive unbeaten streak this season scorching the field in the 200m in a quick 22.11. Following in her wake was Commonwealth Games silver medallist Shericka Jackson in 22.62.

“The 400 is my favourite event but I’m doing very well in the 200,” Miller-Uibo said gleefully. “I’m very consistent and that’s a good thing for me.”

Two recently crowned Commonwealth Games champions were upstaged by their compatriots in the hurdles events. First, Leah Nugent surprised favourite Janieve Russell in the women’s 400m hurdles 54.67 to 54.89. Whilst in the men’s 110m hurdles Hansle Parchment produced a late burst of speed over the final two barriers to edge Ronald Levy 13.31 to 13.32.

The women’s shot put was one of the newest additions to the meeting. Three women with lifetime bests beyond 19 metres including Olympic champion Michelle Carter making her seasonal debut, faced off in the ring. However, the loudest cheers were reserved for home town favourite and newly-minted Commonwealth Games champion Danniel Thomas-Dodd. The Jamaican, despite fouling her last two attempts, wrapped up a close contest after her second effort of 18.59m was not surpassed. Current world number two Raven Saunders of the US was two centimetres behind while Carter finished a distant fifth with 18.16m.

“I was really rusty tonight,” said Carter. “I’m coming off a surgery and I’m still recovering. My rhythm and timing is still off but I’ll keep working and smooth it out before I get to US Nationals.”

The men’s high jump was also a new event. Bahamian Jamal Wilson was the only competitor capable of successfully negotiating the bar when it was raised to 2.24m.

Elsewhere Shanieka Ricketts, who competed at the IAAF Diamond League in Oslo two days earlier, improved her own triple jump meeting record by two centimetres, bounding out to 14.39m.

Reggie Jagers of the US was the only man to breach the 65-metre mark in the men’s discus. His winning effort of 65.54m was also a meeting record.