Double Olympic champion Elaine Thompson fulfilled her role as favourite with an authoritative victory in the women’s 100m while Deanna Price produced a world lead in the hammer throw at the Jamaica International Invitational Meeting on Saturday (19), the opening leg of the 2018 IAAF World Challenge series. 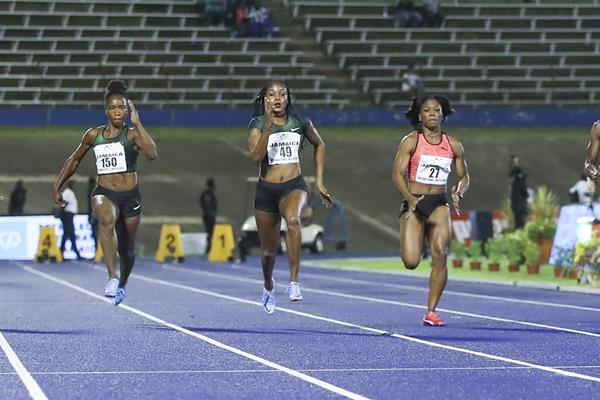 Thompson, who did not get the best start, trailed training partner Christania Williams at the halfway stage before going into overdrive to detach herself from the field crossing the tape in 11.06 (-0.3 m/s).

“I wanted to get a faster time,” said Thompson. “My start wasn’t great, because I’m still bothered by an Achilles injury so it’s hard for me to push from the blocks in the first 30 metres, but I’m still working on it to get into better shape.”

Kerron Stewart (11.25) competing in her farewell race in Jamaica came through on the inside to snatch second in a tight finish a mere 0.01 ahead of Natasha Morrison.

MEN’S SPRINT WINS FOR BAKER AND TAYLOR
In the men’s equivalent Ronnie Baker registered 10.00, (2.0 m/s) the third fastest time this season, to lead a US 1-2 finish with teammate Mike Rodgers (10.04). Tyquendo Tracey 10.14 rounded out the podium cast.

When world U20 world leader Christopher Taylor was announced as a last minute inclusion in the men’s 200m, interest in the event skyrocketed and the race certainly lived up to expectations.

Taylor, drawn in lane seven with LaShawn Merritt on his inside in six and South African speedster Anaso Jobodwana in four, stormed out of the blocks and flew around the top bend to gain a two metre lead coming into the home straight.

Merritt, who came off the curve languishing in fifth, made up considerable ground in the final 50 metres to reel in the entire field except for Taylor who was not entertaining defeat. Taylor showing steely resolve outlasted Merritt to score one of the most satisfying wins of his promising career in 20.49 (0.0 m/s) sending the home crowd into a frenzy. Merritt who was suffering his first loss this season from three starts crossed the line in 20.70 the same time as third place finisher Jobodwana.

Shericka Jackson’s tenacious character was on full display in the women’s 200m when she successfully chased down world leader Blessing Okagbare-Ighoteguonor. Jackson stopped the clock at 22.55 (+0.4 m/s) to the Nigerian’s 22.66.

Demish Gaye defended his men’s 400m title in a carbon copy performance winning in 45.08, the same time as last year. Javon Francis (45.35) accelerated down the straight to move from fourth to second edging Bralon Taplin who had to settle for third in 45.41.

Jessica Beard ran with assurance from gun to tape to score a good win in the women’s 400m in a new personal best of 50.52.

Janieve Russell scored a convincing win in the women’s 400m hurdles in 54.26, almost a second ahead of runner-up Ashley Spencer 55.23. T. J Holmes took down some big scalps in the men’s one-lap obstacle event as he streaked away in a season’s best 48.67. Jamaica’s Shawn Rowe was next in 49.12 followed by Olympic champion Kerron Clement in a season’s best 49.37. “It’s my second race of the season and I’m progressing nicely and to me that is all that matters,” said Clement.

PRICE NABS FIRST HAMMER THROW CHALLENGE POINTS
The IAAF Hammer Challenge Throw was without doubt one of the highlights of the meet with the charismatic DeAnna Price winning the hearts of the appreciative Jamaican crowd.

Price, who was flawless throughout, opened with 73.54m which would have won even if she fouled her next attempts. However, this was her day to shine albeit in overcast conditions. In the second round she produced a mighty swing, launching her hammer high into the evening sky and when it landed some 75.96m away, the distance improved the meeting record by more than two metres and effectively killed the competition stone dead.

Price wasn’t done yet as the small matter of world lead was still on offer. She duly obliged in the fourth round with another Herculean effort of 76.27m. Former meet record-holder Gwen Berry was the best of the rest with 71.32m.

There was almost growing disbelief among the home crowd watching Danniel Thomas-Dodd struggling to reach 18 metres in the women’s shot put. Jeneva Stevens was the only woman to manage the barrier, her last round effort of 18.17m the longest. Thomas-Dodd’s best of 17.96m was still good enough for the runner-up spot.

In the men’s triple jump, Omar Craddock’s clinched the title on his last attempt to surpass teammate Donald Scott’s 16.52m by 7cm.

And in the high jump Jamal Wilson led a Bahamian sweep, topping 2.28m to equal the meet record. Trevor Barry got the nod for second ahead of Donald Thomas after both men could go no higher than 2.25m.

Noel Francis for the IAAF