USA – Penn’s USA vs. The World — Many Wins For The Home Team

The USA vs. The World races that have in recent years highlighted the pro slate at the Penn Relays were somewhat lacking in star power this year, but the intense U.S.-Jamaica rivalry entertained the crowd of 47,756, which cared more about the uniforms than who was wearing them. 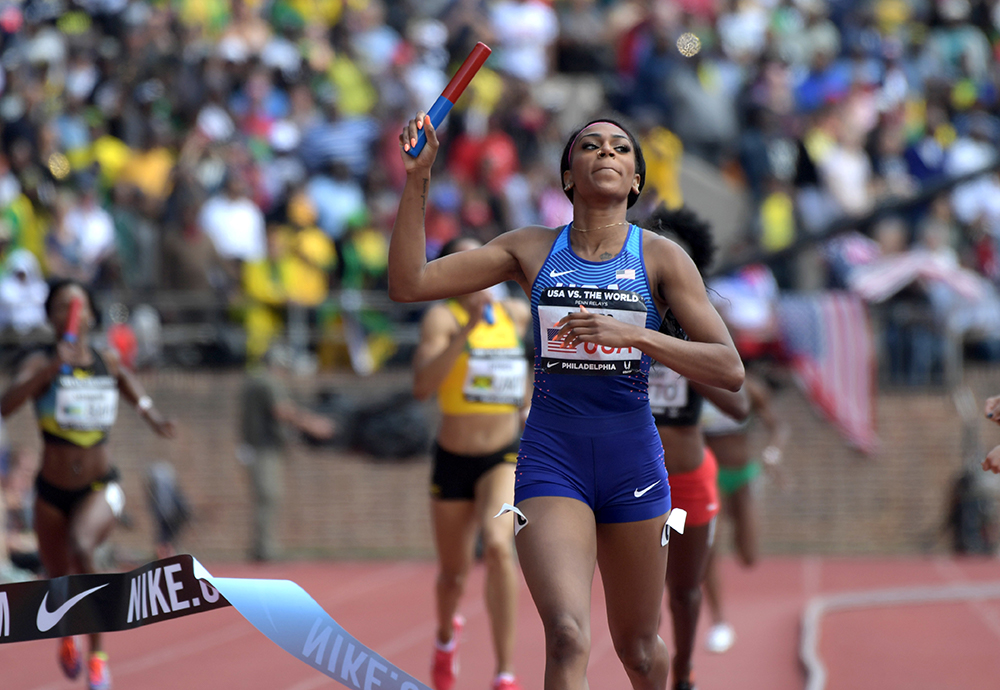 A few big-name veterans were on hand, most notably world 100 champ Justin Gatlin, but the rosters were dominated by a younger generation hoping to build their résumés.

Though many Jamaicans were coming off the Commonwealth Games, they couldn’t quite capitalize on that early-season form, and won just 1 of the 6 events in the series. That was the opening women’s 4×1, where shaky second handoffs plagued both teams. Jura Levy got the baton slightly ahead of American Kyra Jefferson for the anchor and held on for an 0.04 victory in 43.14.

The men’s 1-lapper was far less competitive, thanks to 36-year-old Gatlin’s storming second-leg backstretch. Pointing skyward as he handed off, he gave the USA Red team a sizable lead, which they held to the tape for a 38.39–38.72 win over their USA Blue teammates, while Jamaica (39.17) was never in contention.

“Even when it’s not a championship year, this stadium always has that electricity,” Gatlin said. He marveled at the poise shown by his younger teammates (Lashon Collins, Tevin Hester and Justin Walker) in that atmosphere. “Those guys went out and handled their business like true Americans should on a relay.”

Destinee Brown, Aaliyah Brown & Kimberlyn Duncan—all doubling back from the 4×1—gave Raevyn Rogers a 10m advantage. The former Oregon star blasted her lap in 50.48 to stop the clock in 1:35.20, ahead of the 1:35.59 that another American team set a year ago.

“The [Jamaican] fans are really intimidating,” Rogers admitted of the vocal majority, who dominated the stands with their black, green and gold colors. “They make it seem like it’s their territory, and in a sense we’re trying to earn it back.”

Finally, the women’s 4×4 featured a back-and-forth battle, Jamaica taking the lead early in the opening legs before strong finishes by the Americans to move in front. Daina Harper’s 51.38 anchor ended the conversation, capping a 3:26.73 finish for USA Red, nearly 2 seconds ahead of the islanders.

In individual competition, Johnny Gregorek had the top mark, winning the mile in 3:54.94 after a hard push behind the rabbit with 2 laps to go.

“This year I want to focus on having a lot of confidence, taking the lead early, and being in a good position,” the Oregon alum said. “I want to be seen as someone who controls the race, and makes the race my own.”