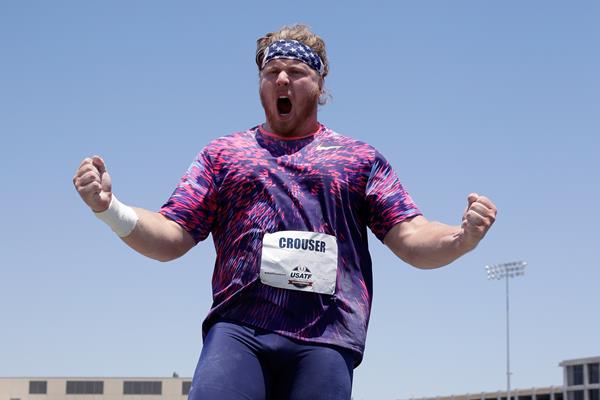 Crouser produced just one legal toss but that opening round effort held up to defeat world champion Tom Walsh, who reached 21.82m in the second round. Curtis Jensen was third with 21.18m.

“It’s good to get back out there and just compete,” said Crouser, who’s been sidelined for the past eight weeks with a hand injury. “I’ve never started this late in a season. I’ve spent the past five weeks getting back into shape. I’m not really quite there but there are some good signs of what’s to come.

“It’s never good to have one throw and five fouls,” he said, smiling. “That shows the inconsistency that’s there. This is only my third day of throwing hard — it’s always good to open the season with a 22-metre throw.”

“This was a confidence booster for me, knowing that I’m kind of back. I’m really excited for where things are going to go.

“I’m hoping to get consistent this year to about where my PR is –22.50, 22.60– and if I can do that, I have a reasonable shot at the world record this season. A lot of people are making calls on it, but I feel like I’m getting close to where it’s getting more realistic.”

For Walsh, the early season world leader at 22.67m, it was his first defeat in 10 competitions this year.

“I felt like I couldn’t quite line it up today, and it was slightly frustrating, but it was definitely a good competition for me,” he said.

After a self-professed slow start, world record holder Kendra Harrison went on to dominate the women’s 100m hurdles, taking the win in 12.37 –her third straight at this event– aided by a +2.5m/s wind.

“I was able to make up for it by hurdle four or hurdle five, and I was able to finish strong,” said Harrison, who clocked a wind-aided 12.40 in her outdoor opener in Knoxville two weeks ago.

“I’m pleased with it, I think it’s going to set up (my season) well, especially going into the Diamond League.”

Harrison is among the headliners at the IAAF Diamond League series opener in Doha on Friday.

Earlier in the week (25), Suhr won the Capital Square mall competition topping 4.80m, then bowed out with one attempt at a would be US record of 5.04m. Nageotte was second and Morris third, both clearing 4.70m.

Sam Kendricks took the men’s victory on Friday topping 5.83m, ahead of Chris Nilsen and Scott Houston, who topped 5.78m and 5.70m respectively.

In the men’s mall event, Andrew Irwin won on countback over Shawn Barder at 5.60m.

By: Bob Ramsak for the IAAF