Even while battling a myriad of injuries and illnesses, the athletes from the small twin island Federation of St. Kitts and Nevis stood tall among their Caribbean counterparts at the 2018 FLOW CARIFTA Games in the Bahamas where they bagged four (4) medals. 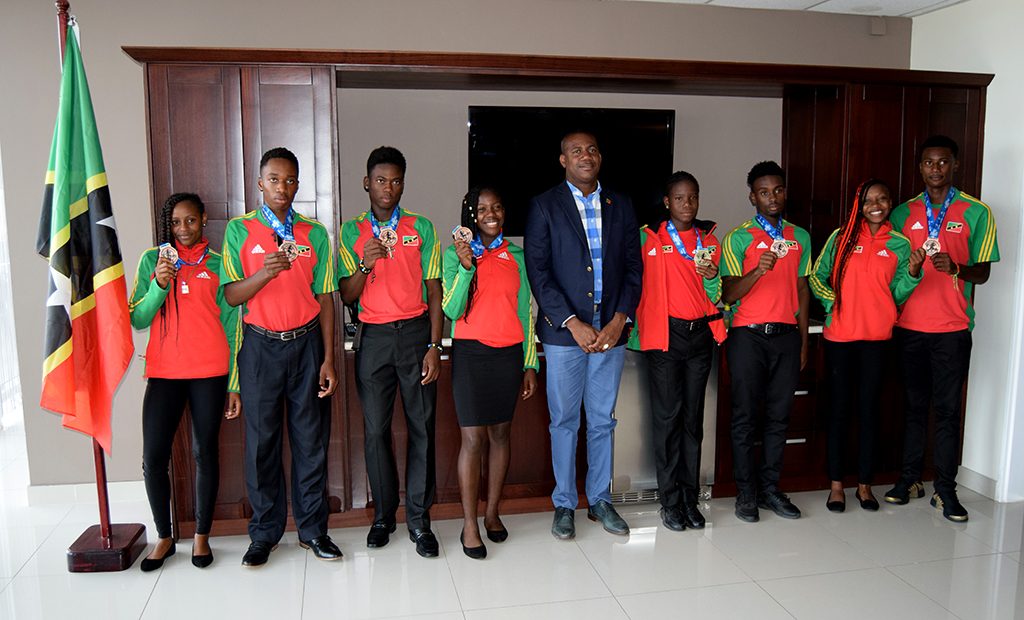 The national representative team of athletes, management and coaches returned home on Tuesday, April 3rd to a warm welcoming reception in the VIP Lounge at the RLB International Airport organised by the St. Kitts and Nevis Amateur Athletic Association (SKNAAA).

The reception was attended by Deputy Prime Minister and Minister of Sports, the Honourable Shawn Richards; Permanent Secretary in the Ministry of Sports, Mr. Stanley Knight; Director of Sports, Mr. Anthony Wiltshire; executive members of the SKNAAA, family and friends of the athletes, as well as representatives of the local media corps.

While giving an overview of the team’s performance at the CARIFTA Games, Head Coach Roatter Johnson said she strongly believes that had it not been for the various injuries and illnesses, St. Kitts and Nevis would have amassed even more medals at the recently meet.

“We had Leroy Chapman, Jahnaza Francis and Timothy Caines who all came down with the flu; a real horrible flu maybe because of the coldness of the hotel but they were unable to perform to [the best of] their abilities. We had Dimetre Browne, Marcus Duberry, Sharim Hamilton, Nickeisha Howe, Aliah Vanterpool and Amya Clarke all with various injuries,” Ms. Johnson reported.

“Now Leroy and Jahnaza are two of our top 4x400m athletes [but] because of illnesses we had to take them out and use our 100m runners. To move from 100m to come and do the 400m is very difficult on your glute and I say thank you to Marcus and Tajarie [Arthurton] for stepping up to the plate.”

SKNAAA President, Mr. Val Henry also praised the valiant and herculean efforts of the young athletes, particularly those who endured the pain and rose to the challenge. 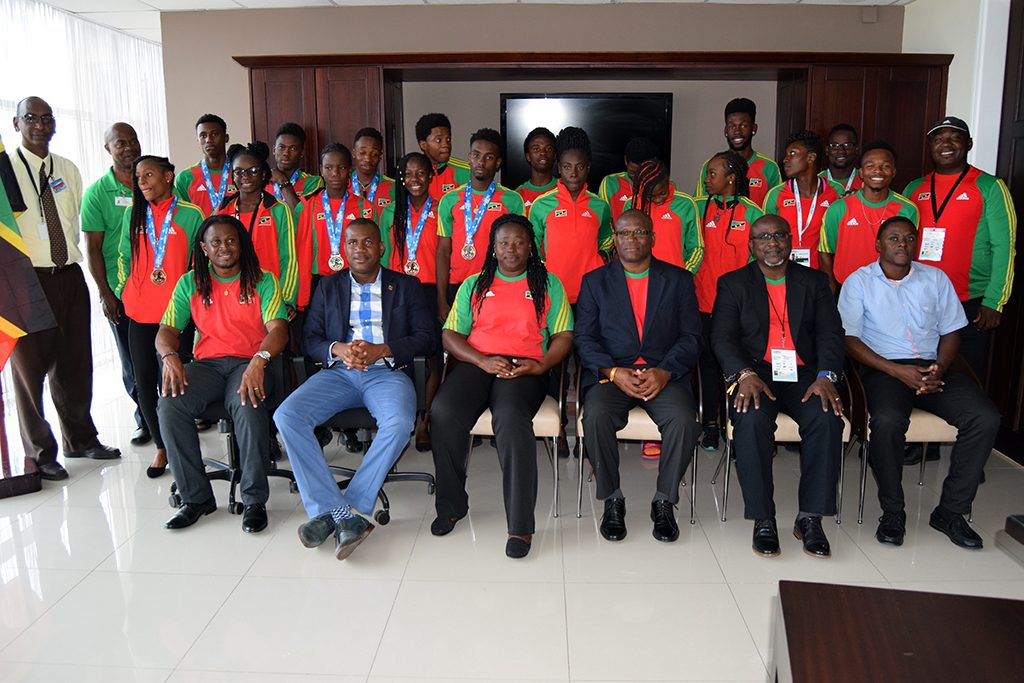 President Henry singled out young Timothy Caines, who, despite being under the weather, accepted the challenge and help the Federation secure a bronze medal in the under-17 males 4x400m event.

Henry said, “Timothy ran in two events yesterday [Monday, April 2nd] when he should have been in bed or the hospital resting, and I remember he was going around the track and when we reached about what I would say was the 300m mark or thereabout, you could have seen the pain he was going through and instead of stopping Timothy continued. He didn’t care what placement there was but he understood he was carrying the flag of St. Kitts and Nevis with him and he wanted to end. But that did not finish there for him. He was put in another event and he carried the baton of St. Kitts and Nevis tremendously well.”

In that 4x400m event, the quartet of Junior Rouse, Sharim Hamilton, Timothy Caines and D’Ateyel Stanley finished third in a time of 3:26.85.

“So when Coach Johnson says that we could have gotten more than the four medals that we did it is true. We had other medals to achieve but what you at home looking and others did not know is that we were with second teams because we had to take a 100m runner and put them in a 400m and for some of the legs we had to just insert people. We could have scratched but we chose not to because we are in preparation for the future as well,” President Henry added.

Special recognition was also given to Trishanni Warner who became the youngest person from the twin island Federation of St. Kitts and Nevis to win a CARIFTA medal.

Warner, a student of the Charles E. Mills Secondary School, shocked the world as she outclassed the field of runners to secure the coveted gold medal in the under-17 girls 800m with a time of 2:15.73.