Pole vault world champion Sam Kendricks of the USA looks back fondly on this “euphoric” moment after sealing the 2017 IAAF Diamond League title. 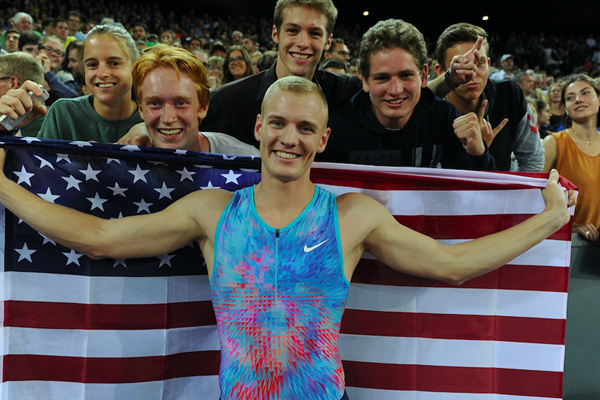 “This photo is very special to me. I don’t know any of the faces in the photo but the fact that they got to share in my success means that they are as much in the moment as I am.

“During my lap of honour in Zurich I was feeling an immense energy – it was crazy. I felt on top of the world. It was like a drug. I was so euphoric. It was such a glorious moment that made all the pain and sacrifices made during training worth it.

“That season I had enjoyed a perfect year, which is just something I could not dream would have happened. If I had even set out to achieve it, it would have been far too ambitious a goal given the quality of opposition in the event and all the variables at stake.

“Yet here I was the Diamond League champion in Zurich (having won five from five Diamond League meets in 2017), a winner of both the US indoor and outdoor titles and world champion.

“Victory can open so many doors and on this occasion for these guys to share that moment with me was very special.

“In 2016 I’d been satisfied to have fulfilled my long-time ambition to compete at an Olympic Games (where he won bronze with 5.85m). But to compete there opened up a whole world of possibilities. It made me dream even bigger.

“With the total support of my coach (and father Scott Kendricks), agent and my wife I promised to give my all in every competition. I wanted my lowest peak to be 5.80m in 2017 and to achieve this I knew I needed to give everything in each training session.

“Every day my coach asked more of me than the previous day. He would throw that extra medicine ball at me and asked one more jump of me and each time used to say the same thing: ‘For the love of the game’.

“To achieve the success I did in 2017, I went through many struggles. I made many mistakes in training. I was put under pressure in training to jump certain heights as if I was in a competition. This taught me what success and failure looked prepared me to jump high. I think it was those struggles and failures in training which unlocked the key to my successful year in 2017 and allowed me to be in this picture with these guys in Zurich. And that’s cool.”

Source: Steve Landells for the IAAF