A huge power cut in Brussels meant the lights were dimmer than usual at the second IAAF Diamond League final on Friday (1), but the athletic performances – notably Shaunae Miller-Uibo’s completion of a 200m/400m Diamond Trophy double – and the new, sudden-death format of the finals shone, well, dazzlingly. 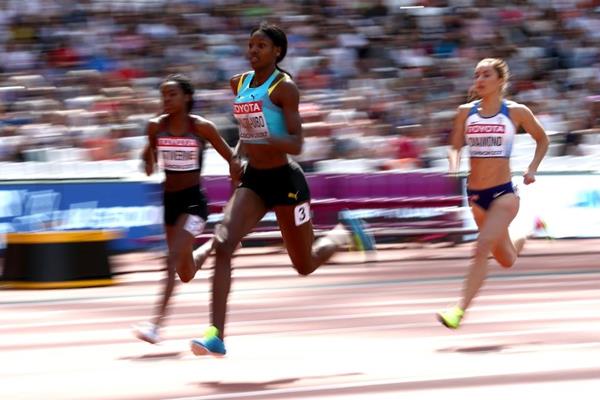 For the 23-year-old Olympic 400m champion from Nassau, in The Bahamas, last month’s IAAF World Championships London 2017 was a huge disappointment. Having been the favourite to win the 400m, she lost concentration and stumbled out of medal contention 20 metres from the line. She later lined up for the 200m final as the fastest entrant this year, but, coming at the end of a tiring week, had to settle for bronze.

Fast forward to the first of the IAAF Diamond League finals, in Zurich on 24 August, and the first part of her season’s rehabilitation took place as she won the Diamond Trophy at the shorter sprint in a national record of 21.88.

Skip on another eight days, and the job was complete as Miller-Uibo headed home the hugely talented 19-year-old Salwa Eid Nasser, whose Bahraini record of 49.88 gave promise of further great things, to complete her late-season double in 49.46 – the fastest time of 2017.

Interviewed before her Brussels race, Miller-Uibo made her boundless ambitions very clear.

“Pressure is something that doesn’t bother me,” she said.

“Now I want to be the best, period. Just to be the best athlete the world has ever seen. I know I have a lot of people to pass on my way up to the top but I’m really working hard towards it and I don’t think I’ve even half fulfilled my potential so I am excited to see where that takes me.”

Miller-Uibo’s task was made clearer and more simple by the fact that, under this year’s re-jigged format, both her races cleared of any residual points from the 12 foregoing IAAF Diamond League meetings through which athletes had qualified for the finals.

The new format of winner-takes-all on the night proved outstandingly effective, especially – as it turned out – for athletes who, like Miller-Uibo, had something to prove after disappointment at the World Championships.

In Brussels, Jamaica’s Olympic 100m and 200m champion Elaine Thompson, who missed a medal in London, returned to winning form as she claimed a second consecutive Diamond Trophy in the shorter sprint, running 10.92 to beat world 100m and 200m silver medallist Marie-Josee Ta Lou, second in 10.93.

Ivana Spanovic, who missed out on a long jump medal in London, finished her season on a high here as another final effort, this time 6.70m, earned her the spoils.

Botswana’s 2012 Olympic 800m silver medallist Nijel Amos was tipped for gold at the World Championships, but missed a medal. He made no mistake in Brussels, however, as he won in 1:44.53.

Olympic 400m hurdles champion Dalilah Muhammad, beaten to gold in London by US compatriot Kori Carter, returned to the gold standard in the King Baudouin stadium.

Olympic shot put champion Ryan Crouser, who finished only sixth in the World Championships final, arrived in Brussels talking about revenge, and he achieved that as he beat all those present who had headed him on that occasion, including the world champion Tom Walsh, with a huge opening-round effort of 22.37m.

The sense of satisfaction was muted, however, by the stupendous final throw of 22.44m that earned Crouser’s compatriot Darrell Hill the winner’s cheque for US$50,000.

Sergey Shubenkov, competing under a neutral banner, also found the new format to his liking as he earned his first big win of the season in the 110m hurdles.

“At last I managed to win in 2017,” said Shubenkov. “I was bored of being second like in Birmingham, Stockholm and the World Championships. Now I’ve got my first overall Diamond League title – maybe thanks to the system of one all-or-nothing race in the final. But it worked for me, so I’m very happy!”

The pattern of making amends had already been firmly set in the first of the IAAF Diamond League finals.

Britain’s Chijindu Ujah, despite being a world champion in the 4x100m, was aghast at failing to reach the individual 100m final. At the Letzigrund he won in 9.97, equalling his season’s best.

Isaac Makwala, whose dramatic and unusual experiences in London yielded him no material reward, claimed a Diamond Trophy and accompanying cheque in winning the 400m in 43.95.

In the men’s 1500m, Timothy Cheruiyot – beaten to gold in London by his Kenyan compatriot Elijah Manangoi – turned the tables to win, with the world champion finishing third.

For Britain’s Mo Farah, the fact that he ended his track career with victory in the 5000m may have been the overriding factor, but he will have derived satisfaction at also defeating the Ethiopian who headed him home in the World Championships final, Muktar Edris.

For 20-year-old Kyron McMaster of the British Virgin Islands, who arrived in London heading the 400m hurdles world lists with 47.80, the World Championships experience proved traumatic as he was disqualified in his heat for a false start.

In Zurich he made up for some of that with victory ahead of the newly-ensconced world champion Karsten Warholm.

Winning the 200m in Zurich was part one of Miller-Uibo’s final flourish to the season, but several other athletes were more than happy with their one-off results.

Noah Lyles, who won the 200m at the IAAF Diamond League meeting in Eugene in 19.90 but failed to qualify for the World Championships, finished off his season with a Diamond Trophy in 20.00.

You could even argue that Sally Pearson’s 100m hurdles victory formed some kind of a recompense. Even though Australia’s 2012 Olympic champion had earned gold in the same arena five years on, her win in Zurich was the more satisfying for the fact that, six years earlier, she had fallen at the seventh hurdle when leading the race that would have added the Diamond Trophy to the world title she had just won in Daegu.

If there are any other IAAF Diamond League changes in the offing, perhaps the two finals should be re-named the Redemption Games, Part I and Part II.

By Mike Rowbottom for the IAAF