Bermudan long jumper Tyrone Smith has been an established international performer for the past decade. Here the three-time Olympian, who earlier this year posted a national record of 8.34m, talks about the challenge of working full time and trying to perform at the top level. 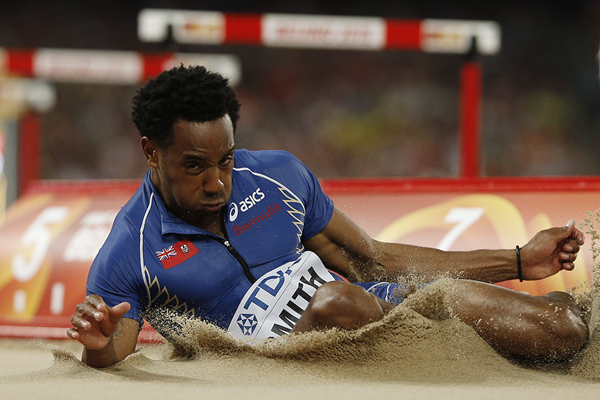 MAKING ENDS MEET
“The greatest challenge I’ve faced is finding a way to finance my track and field career. I haven’t won any Diamond League trophies or major titles and coming from a small nation makes it more difficult to get endorsements and win shoe contracts, so since leaving college I’ve worked full time as a car salesman.

“Each day I train in the morning and work from about 11am until 8pm and then I go back to training at 8.30pm. I’ve done this since the fall of 2007 when I first moved to Houston, Texas in pursuit of making the 2008 Beijing Olympics.

“People ask why I do it and a I guess I’m a stubborn guy. Since early in my career people told me that I wasn’t good enough to get a scholarship at university or that I couldn’t make the nationals or later make the Olympic Games. Yet, like every long jumper, I had a ton of long fouls and those fouls kept me motivated. I wanted to show that I belonged at that level.

“It is obviously tough to be an athlete and work full time. I can’t freely leave when I would like. I’m limited to three weeks off a year plus the goodwill of my company to squeeze in all my competitions in the European season. It can make rest and recovery difficult. If I was a full-time athlete, I would still train in the morning but I would then probably complete my strength training and maybe get some lunch and on an afternoon rest and watch a movie. Instead I’m working and if I have a client to see I’m grabbing food on the run, which is far from ideal.

“I also can’t tell how many times my phone will ring when I’m in the middle of running repeats or doing drills. My instinct is not to answer, but as a salesman it might inhibit me from travelling later in the season because if I don’t make that sale, I might not be able to afford to travel.

“Sometimes I’ve turned up in my training gear for a sale and other times the anti-doping people have come in during the middle of a sale.

“I have considered life as a full-time athlete. I’ve enjoyed a couple of seasons when I’ve had enough money coming in that if I trimmed my living costs and maybe brought in a room-mate I could have gone full time, but the following years the money wasn’t quite there to make it work so it was probably the right decision.

“Ultimately, I’ve reached quite a happy balance with training and work. I just think that my life is not so different to my college days of wake up, go to class, train and go to bed. The only difference now is I go to work rather than go to school. That is how I trick my mind into accepting that what I do is normal. I have never stopped being busy. I have just replaced school with work.”

Steve Landells for the IAAF