JAM – Now Retired, Bolt Excited About the Next Chapter

It was not the fastest 400m of Usain Bolt’s career (his lifetime best will go down in history as 45.28, dating back to 2007) but it was a landmark circuit for the Jamaican who has illuminated track and field these past nine years with his superhuman talent and his stellar personality. 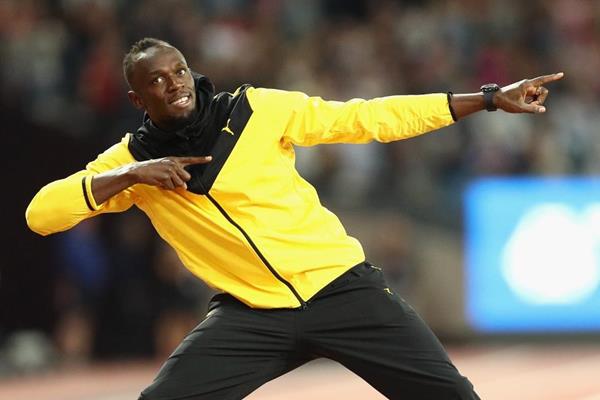 Twenty four hours after his final race ended in the anguish of a torn hamstring on the anchor leg of the 4x100m, the Jamaican phenomenon was back on the track in the London Stadium, soaking up the adoration on a fitting farewell lap of honour at the end of the final session at the IAAF World Championships London 2017.

Before setting off at walking pace, the Lightning Bolt was presented with a framed piece of lane seven of the original track in the same arena, in which he won the second of his three Olympic 100m titles (in a Games record of 9.63) and 200m titles (in 19.32) in 2012, by IAAF President Sebastian Coe and London Mayor Sadiq Khan.

The trackside clock flashed up the world record times Bolt set at the 2009 IAAF World Championships in Berlin, 9.58 and 19.19, and he halted both at the 200m start and 100m start for a moment’s contemplation.

“I was just saying goodbye to everything. I think I almost cried. It was close, but it didn’t come.”

Asked about the reaction from the sell-out London crowd, Bolt enthused: “It was brilliant. The support has not changed. I expected it.

“It’s really sad that I have to walk away now but the energy of the crowd is great. The fans really love me and I appreciate that.

“I have no regrets about running this year. The fans asked me. They wanted to see me one more year.

“I wanted to do it for my fans. Without them, I wouldn’t have done what I’ve done. They gave me the energy.

“I don’t think one championship is going to change what I’ve done. I remember after losing the 100m final, someone said, ‘Don’t worry. Muhammad Ali lost his last fight’.

“I’ve proved myself year in, year out. I think the fact that I didn’t win my last race doesn’t affect what I’ve done in the sport.”

Bolt started his career hampered by injury and, sadly, has finished with an injury too. “I had treatment last night and treatment today,” he said, “and I’ll have it treated until I get an MRI scan to see if it’s as bad as I think it is. After pulling my hamstring, I’m worried about it.

“I just came out and did my best. It didn’t play out to the book but everything happens for a reason. I don’t know why. It’s just championships.”

As for the future, Bolt said: “The first thing I’m going to do is go out and have some fun – just to party. I need to go out and have a drink. I’ve had a stressful championships.”

And, beyond that, might there be a change of heart and a return to the track? “No,” said Bolt, emphatically. “I think I’ve seen too many people return and come back into the sport and shame themselves. I won’t be one of those persons.

“I would like to stay involved in athletics but I’m not sure what specifically I’ll be doing. My agent is talking to Mr Coe to figure out in what way I can help out the sport.

“I’m excited about it. Track and field gave me everything I had. “

By: Simon Turnbull for the IAAF