World record-holder Kendra Harrison sped to a 12.28 victory in the 100m hurdles at the Istvan Gyulai Memorial in the Hungarian city of Székesfehérvár on Tuesday (4) to jump to the top of the 2017 world list. 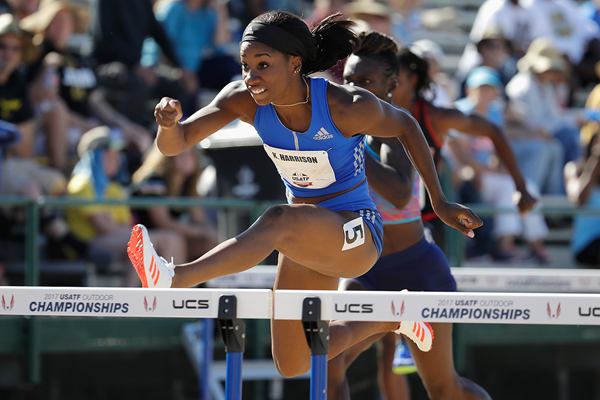 Drawn in lane four, the US sprint hurdler blasted out of the blocks and initially had 2012 Olympic champion Sally Pearson, racing in lane seven, for company over the first few flights of hurdles. But Harrison’s flawless technique over the barriers gradually pulled her clear of her opponents and she crossed the line several metres ahead in 12.28 (0.1m/s).

Jasmin Stowers finished second in 12.66 and Sharika Nelvis was third in 12.69.

In his first race since his surprise loss at the recent IAAF Diamond League meeting in Paris, the Jamaican got out well but struggled to shake off the challenge of world champion Sergey Shubenkov. McLeod eventually managed to edge ahead to take the victory in 12.96, just 0.06 shy of the recent national record he set when winning the Jamaican title.

Shubenkov crossed the line in 13.01, his second-fastest time, while world record-holder Aries Merritt was third in 13.11. Much to the delight of the crowd, Hungary’s Balazs Baji broke his own national record in fourth, clocking 13.15.

FAJDEK AND WLODARCZYK MAINTAIN DOMINANCE
The Istvan Gyulai Memorial formed part of the IAAF Hammer Throw Challenge and provided Polish duo Pawel Fajdek and Anita Wlodarczyk with an opportunity to extend their lead at the top of the standings.

Both world champions duly obliged. Fajdek led from the outset with his opening throw of 78.05m and then sent his hammer beyond 80 metres in round three, throwing 80.29m. After an improvement to 81.19m in the fourth round, he produced the best mark of the day – 82.64m, his second-best throw of 2017 – in round five before ending his series with 80.65m.

As he has done in all of his competitive outings this year, compatriot Wojciech Nowicki, the world, Olympic and European bronze medallist, finished second to Fajdek, this time with a best of 77.98m. Olympic champion Dilshod Nazarov was fourth with 76.37m.

Like Fajdek, Wlodarczyk dominated the women’s contest; all six of her efforts would have been enough to win. Her second, third, fourth and fifth throws all landed beyond 77 metres, her best of 77.77m coming in round three.

Asian record-holder Wang Zheng was second with 73.54m, while Poland’s Joanna Fiodorow was third with 72.66m.

ONE-LAP BAHAMIAN DOUBLE
Olympic champion Shaunae Miller-Uibo, contesting her first European race of 2017, was a class apart in the 400m. The Bahamian had already built up a clear lead at half way and continued to ease ahead of her rivals. She could afford to ease down at the end and still won in a meeting record of 49.86.

Miller-Uibo’s compatriot Steven Gardiner won the men’s event by an even bigger margin. The tall 21-year-old maintained his unbeaten streak this year, crossing the finish line in 44.61 to win comfortably from Slovenia’s Luka Janezic (45.44).

SAMAAI SMASHES MEETING RECORD
African champion Ruswahl Samaai added 43 centimetres to the meeting record in the long jump, putting together one of the best series of his career.

All five of the South African’s valid attempts were beyond 8.20m. He saved his best for last, sailing out to 8.34m to take the victory ahead of Olympic champion Jeff Henderson, who jumped 8.18m in the final round.

Bogdan Bondarenko led a Ukrainian 1-2 finish in the men’s high jump. The 2013 world champion won on countback from Andrii Protsenko after both men cleared 2.30m.

But the biggest cheers during the competition went to Italy’s Gianmarco Tamberi who, in his fourth competition since returning from an ankle injury, added eight centimetres to his season’s best with a leap of 2.28m to take third place.

It was a fairly straight-forward race for the world record-holder, who closely followed the pacemaker on the first lap before kicking for home to maintain his lead over compatriot Job Kinyor.

Another Olympic champion, Dalilah Muhammad, wasn’t quite so fortunate.

In her first outing since winning a historic 400m hurdles race at the US Championships, Muhammad was in contention for the lead for most of the race, but she clattered the final hurdle. It allowed Kori Carter to move into pole position, finishing strongly to win in 54.22. World indoor champion Kemi Adekoya also overtook Muhammad in the closing stages to take second place in 54.57 as Muhammad crossed the line in third in 54.62.

Blessing Okagbare won the women’s 100m in 11.11 and then later lined up for the long jump. World and Olympic champion Tianna Bartoletta, who had finished fifth in the 100m in 11.27, gained redemption by winning the long jump with 6.79m, finishing just two centimetres in front of Okagbare.