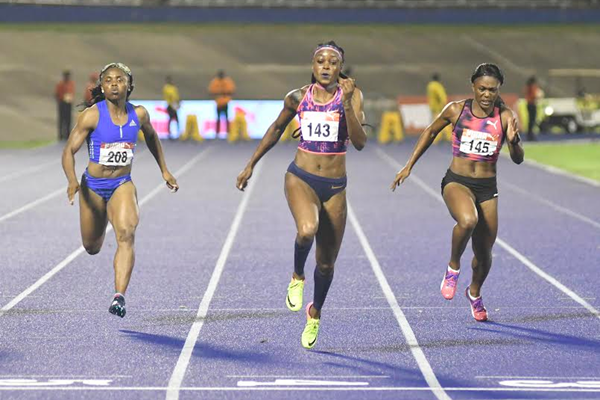 She ran an almost perfect race leaving no doubt that she’s back to her best and definitely the one to beat at the IAAF World Championships London 2017 in August.

“I’m really satisfied with this time,” said Thompson, who came within 0.01 of her lifetime best set last year. “I was happy to come out here and go through the rounds smooth and healthy.”

Thompson will take no further part in the championships though having not declared for the 200m.

“Stephen Francis is a great coach, he has decided what I’m going to run at the World Championships and I have to just work with the flow,” Thompson explained. Thompson, who has a 100m wild card entry, will be joined in London by Simone Facey (11.04), Jura Levy (11.06) and Natasha Morrison (11.09).

Before Thompson’s heroics, there was high drama in the first semi-final. It transpired that Auburn University sprinter Jonielle Smith, though not visible to the naked eye, had violated the false start rule. Her subsequent ejection caused a five-minute delay with the vociferous crowd showing their displeasure with loud boos.

BLAKE SUCCESSFULLY DEFENDS
In the men’s section 2011 world champion Yohan Blake showed further signs of encouraging form to claim back-to-back 100m titles. Blake, who cruised through the early rounds, unleashed a burst of speed in the finals that his opponents could not match running a season’s best 9.90 (0.8 m/s). Julian Forte (10.04) clinched second by a whisker over Senoj-Jay Givans (10.05).

“Every time I run I keep getting better,” said Blake. “Every day Usain Bolt has been encouraging me and I just want to maintain this form going into the World Championships.”

The final was missing a few recognisable names who exited or failed to show up at various stages throughout the rounds, due to injuries. The list includes Asafa Powell, Kemar Bailey-Cole and Jevaughn Minzie. Promising sprinter Odean Skeen also pulled up in the final.

WHYTE SPRINGS SURPRISES IN WOMEN’S 400M HURDLES
Boasting Jamaica’s three historic finalists from Rio, the women’s 400m hurdles final lived up to its billing as one of the most pulsating events. Janieve Russell, who missed last year’s trials through injury, ran aggressively from the outset, opening up what seemed an insurmountable lead at the top of the final bend.

Ristananna Tracey and Leah Nugent who were on Russell’s inside began to chisel into her lead in the home straight. With two flights of hurdles to clear Russell began to wilt under the pressure. It was now anybody’s race as all three women were almost neck and neck upon reaching the final barrier.

However, the relatively unknown Rhonda Whyte came with a late surge on the outside to snatch undoubtedly, the most incredible win of her career in 54.29, a new personal best. Tracey grabbed second in 54.49 ahead of Nugent who ran a season’s best 54.54. Russell, who started out so promisingly could not maintain her composure and faded badly to fourth in 55.34. She looked inconsolable afterwards.

HYDE EDGES MOWATT
In the men’s contest, the battle for honours was between two-time world U20 champion Jaheel Hyde and red hot NCAA finalist Kemar Mowatt who rekindled their rivalry which started three years ago at the Jamaican high school championships popularly known as ‘Champs’, in perhaps the most exciting race of the night.

Hyde went out fast employing a ‘catch-me-if-you-can’ approach. He led all the way through into the home straight where Mowatt kept in striking distance began to pounce. He began to reel Hyde in stride by stride and as if by reflex the crowd rose to its feet. Mowatt was desperate to gain sweet revenge but Hyde was running like a man whose future depended on the outcome.

Both men were engaged in a desperate sprint for the finish line with Hyde just clinching the win in 48.53 seconds 0.01 shy of his personal best. Mowatt, who competes for the University of Arkansas, was credited with the same time. As if the excitement that Hyde and Mowatt displayed wasn’t enough, 36 year-old Ricardo Cunningham, a former middle distance runner who took up this event last year, came through for third in a massive 48.83 personal best.

The form of Rio finalist Annsert Whyte coming into the trials could be best described as disconcerting, and in just 50.23 seconds he saw his hopes of competing in London vanish. That effort could place him no higher than fourth in his 400m hurdles opening heat which prevented him from advancing and defending his domestic title.

Elsewhere, national record holder Kemoy Campbell, competing in his first 5000m outdoors this season, had the thankless job of being his own pacemaker as the only other entrant Oshane Archibald gave up the challenge after just two laps.

Campbell crossed the finish line in 13:53.61. Luckily for him he had already achieved the world championships qualifying standard (13:22.60) when he finished seventh at the Boston University (BU) Last Chance meeting on 26 February running a national record 13:14.45.

Elsewhere on the opening night Clive Pullen comfortably retained his men’s triple jump crown sailing out to 16.83m. Pullen, who earned the 16.80m qualifying mark during the indoor season when he bounded out to a personal best 17.19m, ended Jamaica’s six-year wait in this discipline at a World Championships.

“I picked up an injury pretty early in the outdoor season,” said Pullen. “This is my third meet coming back from injury, so it’s a positive feeling and I’m headed in the right direction.”