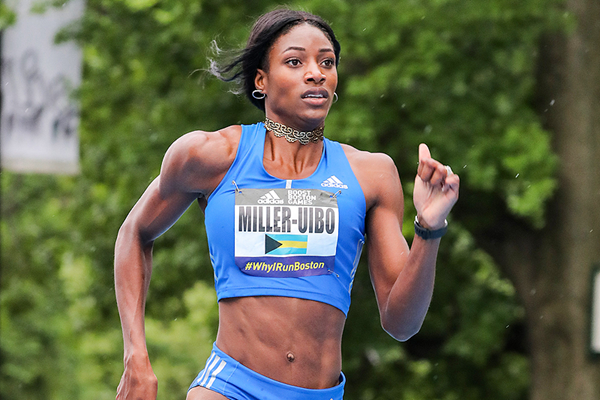 Shaunae Miller on her way to winning the 200m in Boston Photo: Victah Sailer

Competing in her first ever street athletics meeting, the Bahamian’s time is the fastest mark in history for the rarely run 200m straight, smashing the previous best of 22.55 set by Allyson Felix in 2010.

Miller-Uibo was level with USA’s Natasha Hastings for the first half of the race, but she pulled away with ease over the final 60 metres and went on to win by 0.74. Hastings’ mark of 22.50 was also faster than Felix’s previous world best.

“We didn’t come here today with any particular time in mind, but this run shows that I’m in great shape and I’m excited for the rest of the season,” said Miller-Uibo, who clocked a national record of 21.91 when finishing second at the recent IAAF Diamond League meeting in Eugene, finishing ahead of Olympic champion Elaine Thompson. “It was really exciting; having the crowd so close to you gives a completely different feeling.”

Miller-Uibo will attempt to double up in the 200m and 400m at the IAAF World Championships London 2017 and this latest performance, she says, has given her confidence for the rest of the season.

Little more than an hour earlier, another one of Felix’s straight sprint world bests had fallen.

Olympic silver medallist Tori Bowie won the 150m in 16.30 (0.1m/s), bettering Felix’s best mark by 0.03. Bowie, who recently clocked a world-leading 21.77 over 200m in Eugene, finished half a second ahead of US compatriot Shalonda Solomon.

Jasmin Stowers came out on top in a competitive 100m hurdles final, winning in 12.61, while Trinidad and Tobago’s Kelli-Ann Baptiste won the 100m flat in 11.06 from compatriot Michelle-Lee Ahye.

Just one thousandth of a second separated Keston Bledman and Akani Simbine in the men’s 100m. Both men were given the same time of 10.21 with Bledman awarded the victory in a photo finish.

The first day of the competition was held on Friday afternoon at Dilboy Memorial Stadium in Somerville, seven miles away from the street set-up on Charles Street.

It was the second Ethiopian victory of the evening, following Buze Diriba’s 8:45.44 triumph in the women’s 3000m.