It was billed as the race of the weekend, and the women’s 200m duly delivered a contest for the ages at the Prefontaine Classic in Eugene on Saturday afternoon (27), with Tori Bowie upsetting the odds and flying to victory in an IAAF Diamond League record of 21.77 (1.5m/s). 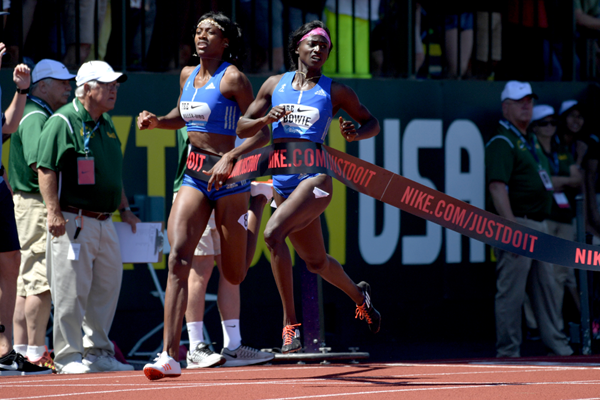 In truth, the race was as good as over the moment they turned for home, with Bowie already holding a sizeable advantage over the world’s fastest women. The Olympic 200m champion, Elaine Thompson, simply had no response to the US sprinter’s pace, nor did world champion Dafne Schippers.

In the end, it was Olympic 400m champion Shaunae Miller-Uibo who got closest, the Bahamian powering home from lane eight to take second in a national record of 21.91. Thompson came home strongly for third in 21.98, with Schippers fourth in 22.30.

It exemplified the depth of the race that Allyson Felix, one of the greatest 200m runners in history, could manage no better than fifth in 22.33, just ahead of Marie-Josee Ta Lou (22.37).

“I felt really good before the race, both physically and mentally,” said Bowie. “I tried something new this race. I came in not putting any pressure on myself.

“I don’t look at it as a big deal because I’m just preparing for the national championships. I knew that we had some 400m runners in the race, so I thought: oh my god, their closing is going to be amazing,’ so I knew I couldn’t slow down or they would catch me.”

CROUSER STAYS ON TOP
If Bowie’s run was the supreme display of pace on offer today, then Ryan Crouser proved the epitome of power, the Olympic champion taking victory in the men’s shot put with his fifth-round effort of 22.43m, the second longest throw in the world this year.

“It’s great to come here with the top eight guys in the world and come out with the win,” said Crouser. “It’s the biggest meet besides world championships so hopefully it’s a good sign going forward this summer.”

Crouser credited the move to full-time training for his improved form at this year’s Prefontaine Classic.

“Last year I was coming off an injury, wasn’t signed with anyone, and had just finished school,” he said. “But now I’m a full-time professional so it’s a world of difference and you can see it in the results.”

His touted head-to-head with world champion Joe Kovacs never materialised; Kovacs, who had thrown 22.57m just nine days ago, able to manage no better than his second-round effort of 21.44m, which placed him third.

“I wanted a big throw but I got it last week,” said Kovacs. “I wanted to do it here but I trust my coach; he hasn’t done me wrong and he knows when it counts. A big throw [at the IAAF World Championships] in London would mean a lot more than a big throw here.”

It was New Zealand’s Tom Walsh who got closest to Crouser, but his 21.71m was still 72 centimetres off the US thrower’s best.

SPENCER FLIES TO WORLD LEAD
In the women’s 400m hurdles, Ashley Spencer clocked the fastest time in the world this year and a lifetime best of 53.38 to take victory, edging US compatriot Shamier Little, who ran 53.44 for second from lane one. Olympic champion Dalilah Muhammad was fifth in 54.53.

“I know Shamier is a very talented athlete and I’m just a newcomer in this event so coming off the last hurdle I had to run like hell, and that’s what I did,” said Spencer. “I didn’t expect to go as fast as I did.”

Omar McLeod continued his dominance in the men’s 110m hurdles, running yet another clean, clinical race to take victory in 13.01 ahead of Jamaican teammate Ronald Levy (13.10) and local fan favourite Devon Allen (13.11).

“My race wasn’t as sharp but I was glad I was able to get a clean run,” said McLeod. “I’m always consistent, but the preparation this year was different. I didn’t have to peak indoors, so I think I’m going to peak at the right time.”

In the 100m hurdles, Jasmin Stowers proved best of the seven US women in the line-up, and that, unsurprisingly, was also good enough for victory, clocking 12.59 (0.8m/s) ahead of compatriots Queen Harrison (12.64) and Dawn Harper Nelson (12.66).

“Last year I fell a lot and hit a lot of hurdles, but as long as I run clean I’ll have a good race,” said Stowers. “Right now that’s my focus and I felt great out there.”

The men’s 100m was won in commanding fashion by Ronnie Baker, who powered down the track to a wind-aided 9.86 (2.4m/s). Su Bingtian demonstrated China’s continuing development in the event with a second-place finish in 9.92, with Britain’s Chijindu Ujah third in 9.95. Olympic bronze medallist Andre De Grasse was fourth in 9.96, with Justin Gatlin fifth in 9.97.

“I felt great,” said Baker. “I felt like I had a really good start for the first time in a long time, so that was amazing and after that I just went through my motions.”

“It’s always an incredible field in the women’s 100m,” said Akinosun, “but the finish is the best part of my race so I knew if I just put myself in the mix I could pull it off.”

LaShawn Merritt justified his favourite’s tag in the men’s 400m, taking victory in 44.79 ahead of Botswanan youngster Baboloki Thebe, who edged Vernon Norwood to take second, 45.04 to 45.05.

“I’ve been running a lot this year,” said Merritt. “I knew I was going to take a break in June, [before the US Championships] so I just ran a few more races before that. I got the victory, so I’m pleased. I know the younger guys are coming, but they keep me motivated. They’re going to be full of adrenaline, so I can’t get complacent.”

Source: Cathal Dennehy for the IAAF