The IAAF is saddened to learn that renowned Cuban athletics journalist and AIPS America Vice President Enrique Montesinos died in Paris on Tuesday (16) at the age of 69. 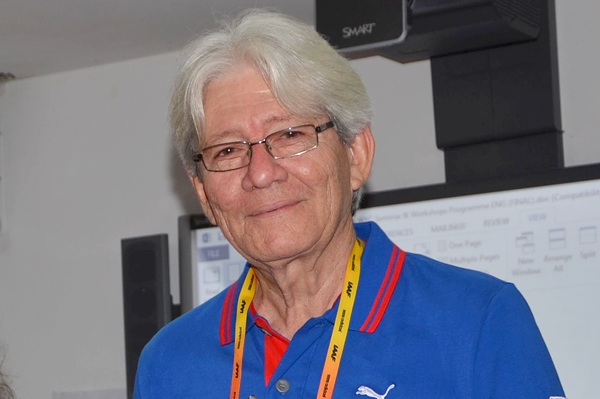 Montesinos was on his way back from the 80th Congress of the International Sports Press Association (AIPS) in Seoul, which he had attended in his capacity of vice president of the continental section of AIPS America.

The president of the Circulo de Periodistas Deportivos de Cuba, the Cuban Sports Press Union, succumbed to a pulmonary thrombus.

Born in the eastern city of Santiago de Cuba, Montesinos earned a degree in sports and physical culture and joined Granma newspaper in 1967. He made his first international sports coverage at the Central American and Caribbean Games in Panama in 1970.

Montesinos’ passions were athletics and basketball. He covered several World Championships and Olympic Games. He published more than 20 books and one of his major contributions was the book entitled Los Juegos Más Antiguos del Planeta (The world’s oldest regional games), a comprehensive compilation on the Central American and Caribbean Games. The first edition was published in 1982 and the Central American and Caribbean Sports Organisation (ODECABE) adopted it as an official publication at the 1993 Games. The next edition was ready for the 2018 Games in Colombia. He published a similar compilation on the Pan American Games.

His outstanding work and dedication to research earned him the Jorge Enrique Mendoza Journalism Award for lifetime achievement awarded by the Cuban Sports Press Union and the Prize for Lifetime Achievement awarded jointly with the Cuban Institute of Sport (INDER).

He was a mentor to generations of Spanish-speaking reporters in his native Cuba and across Latin America in his capacity of president of the Cuban Sports Press Union and his involvement at the Jose Marti Journalism Institute, which, among other activities, organised 12 editions of the yearly international postgraduate course in sports journalism, the latest one last month.

Montesinos also exercised the role of mentor and lecturer in seminars and workshops organised in the context of several IAAF Media Development Projects (MDP) in Latin America, sharing his profound knowledge of and passion for athletics with younger colleagues. The latest occasions included the MDP at the Central American and Caribbean Games in Veracruz 2014, the MDP at the World Youth Championships Cali 2015 and the MDP at the Iberoamerican Championships Rio 2016. Montesinos had been working with the IAAF on the upcoming Media Development Project at the South American Championships, scheduled for June this year in Asunción.

Montesinos spent his entire career at Granma newspaper, where he served as head of the sports department and deputy director of the newspaper’s digital edition.

Loved by his colleagues in Cuba and abroad for his professionalism but also for his amiability and his calm and modest demeanour, Montesinos was always there to help fellow journalists and those new in the field. He is survived by his wife and two daughters.