Coming just one week after the IAAF/BTC World Relays Bahamas 2017, sprint powerhouses USA and Jamaica had plenty of motivation heading into the final day of the Penn Relays in Philadelphia on Saturday (29). 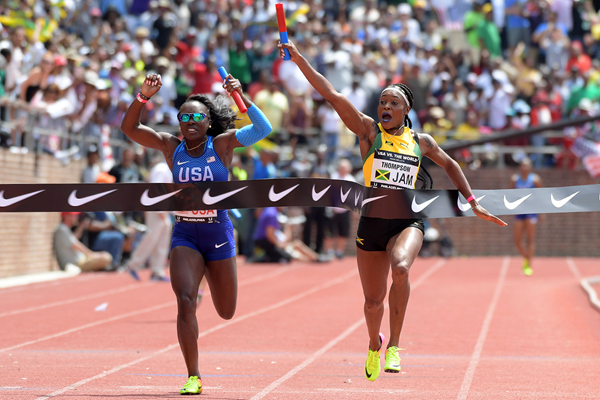 Both teams found redemption of sorts in the women’s 4x100m. USA had failed to get the baton around in the final in Nassau, while Jamaica had been handed a surprise defeat by Germany. Both teams fared much better on Saturday as a full-strength Jamaican team, anchored by double Olympic champion Elaine Thompson, won in 42.25. Their time was just 0.06 shy of the meeting record set in 2012 by the US team that went on to win Olympic gold in a world record time later that year.

The US team, which included two of the women from their World Relays quartet, finished second in 42.42, faster than Germany’s winning time from Nassau last week.

The tables were turned in the men’s 4x100m, though, as USA came out on top, winning in 38.87. Following their baton blunder in Nassau one week prior, Jamaica managed to get the stick around safely on this occasion, finishing second in 39.01.

It is rare for the USA to suffer a defeat in either the men’s or women’s 4x400m, but Jamaica managed to beat the host nation in both events on Saturday.

In the college and high school divisions, both men’s 4x100m finals were won by Jamaican teams. And both ran faster than the senior professional team.

GC Foster College retained their title, winning in 38.94. Calabar High School, meanwhile, won their division in a meeting record of 39.00. Had second-leg runner Christopher Taylor been born just a few months later, their time would have smashed the world U18 best.

Jamaican high schools Calabar and Hydel also broke meeting records in the 4x400m races with their respective times of 3:08.59 and 3:33.99. A stunning 50.37 anchor from Sydney McLaughlin elevated her team, Union Catholic, from seventh to third place but it wasn’t enough to catch Hydel and second-placed St Jago.