The best definitely was saved for last to conclude the final day of the US Indoor Championships in Albuquerque, New Mexico, on Sunday (5). 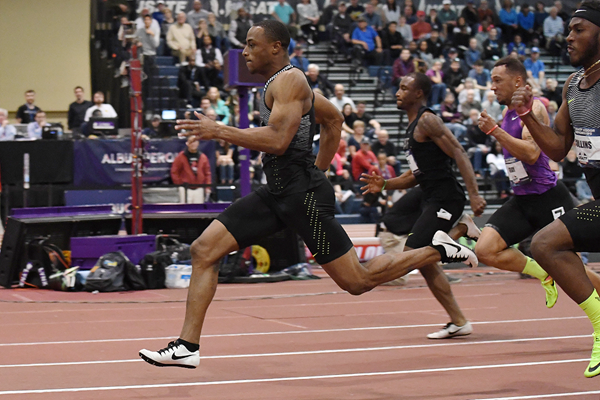 The men’s 60m closed the meeting and Albuquerque’s 1561m of altitude provided some aid to the sprinting as Ronnie Baker sped a world-leading 6.45 to comfortably hold off LeShon Collins (6.54).

Baker had run 6.46 in Torun in mid-February for the world lead. In Albuquerque, the two-time NCAA indoor champion led all the way in clocking his PB. A mid-race surge gave him an even wider lead at the finish.

“The notion was in my head that I could do something special in the altitude,” said Baker, who moves up to sixth on the world all-time list. “Now, my biggest goal for this year is to make the World Championships team this summer. And my ultimate goal is to make the Olympic team in 2020.”

In the final women’s contest, staged just before the men’s dash, Olympic 4x100m champion Morolake Akinosun sped to her own 60m PB of 7.08 to outrun Dezerea Bryant by 0.03.

Bryant got out first in the final, but Akinosun was right behind and then edged into the lead at about the 40-metre mark. The 22-year-old finished strongly to cut down her PB from the 7.17 she ran at the Millrose Games last month.

“My start made all the difference,” said Akinosun. “Also, I just stayed focused on running only my own race.”

Just before the sprints ended the championships, both 60m hurdles finals set the tone for the meet-climaxing speed events. In the women’s barriers, outdoor world record-holder Kendra Harrison got the capacity crowd excited as she tied Gail Devers’s 7.74 meeting record in her heat to take 0.01 off the PB she set in January.

Harrison didn’t get the best of starts in the final as Christina Manning led to the first barrier. But Harrison’s superior technique between hurdles gave her the lead before the fourth hurdle and she pulled away to win in 7.81 ahead of Jasmin Stowers (7.82). Manning fell back to third in 8.02.

“I popped up right after the gun,” Harrison said in analysing her start in the final. “And then I didn’t bring my trail leg through as quickly as I would have liked. But I did run fast in the heat, which is encouraging for outdoors.”

Also encouraged for the outdoor campaign is 110m hurdles world record-holder Aries Merritt, who won the men’s 60m hurdles in 7.51 after leading virtually all the way in holding off Aleec Harris (7.54) and Jarret Eaton (7.59).

“I’m happy to get the win,” said the 31-year-old after running his fastest time since 2012. “It shows that I still have it. Now I really want to make the World Championships team for London.”

Merritt has coped with the well-reported kidney transplant that he underwent just three days after claiming the bronze medal at the IAAF World Championships Beijing 2015. He came back well enough to finish in the dreaded fourth place at last year’s Olympic Trials to just miss the team for Rio.

“Last year was very hard,” he said of his recovery and eventual return to racing. “I was in pain all of last year, but I didn’t say anything because I didn’t want people to know. It especially hurt when I would work on my trail-leg mechanics.

“But I just hung in there and nearly made the team. I really feel that if I had another six weeks of training between the Trials and Rio, I could have challenged for a medal at the Games. Now, I’d like to do that at the Worlds this summer.”

SOURCE: Jon Hendershott for the IAAF