USA – Crouser Debuts With A 22.05m Blast In Christchurch 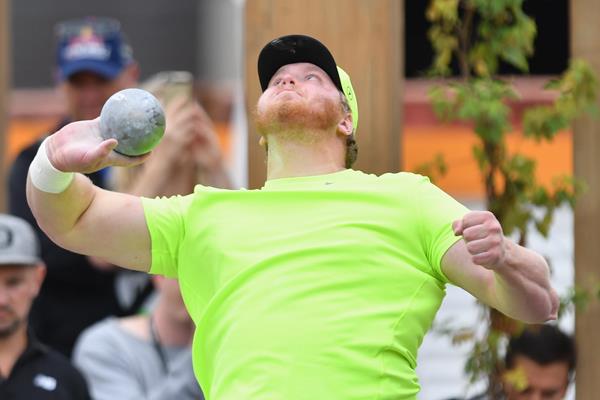 “That surprised me a little bit,” Crouser told Stuff.co.nz, of his first competition since mid-September.

“I was hoping to be real consistent at 21 metres. I’m in heavy strength training so the speed kind of wasn’t quite there. I felt good but I felt a little bit out of control.”

Competing before an enthusiastic crowd of 1200 gathered at the Retro Sports Facility, Crouser took an early lead with a 21.06m effort in the opening round but it proved to be short-lived. After fouling his first attempt, New Zealander Tom Walsh, the Olympic bronze medallist, opened the second round with a 21.46m toss to take command. Three throwers later, Crouser responded with his 22.05m blast, one that effectively ended the competition.

It was the fourth best competition of US athlete’s career, a New Zealand all-comers record, and boding well for the 24-year-old’s ambitions this year, the earliest in a season that anyone has broached the 22-metre-line.

“It’s a good sign to be able to throw 22 metres,” Crouser said. “So to do that purely on strength right now, I was a little surprised.”

Crouser fouled in rounds three and five, reached 21.01m in the third before lowing out with 20.90m in the sixth.

As for Walsh, his next best effort of 21.31m came in round three. A pair of fouls followed before he ended the competition with 20.85m in round six. He too was pleased.

“To throw 21.46 so early in the year is great so I really can’t complain,” said Walsh, the Oceania record holder at 22.21 set last year, speaking with The Hub. “I was hoping to give 22 (metres) a nudge but I was happy with it.”

Behind the afternoon’s ‘big two’, New Zealand’s former world U18 and U20 champion Jacko Gill reached 20.69m to finish third. Damien Birkinhead of Australia was fourth with 20.21m, ahead of two-time world indoor champion Ryan Whiting of the US, who was a distant fifth at 19.58m.

The same line-up is expected to take the field again next weekend at the Auckland Track Challenge on 26 February.